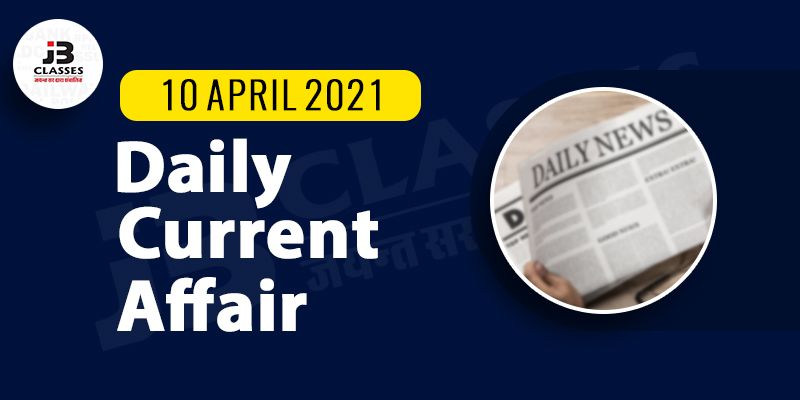 Here is the GK update of 10th April 2021 to help you prepare the Current affairs part. After reading this section, you can successfully attempt Current Affairs Quiz.

Tika Utsav is a vaccine festival. It is to be held between April 11, 2021, and April 14, 2021. The main objective of the festival is to vaccinate as many people as possible. It will also focus on zero wastage of the COVID-19 vaccine.

Currently, three states are receiving a maximum number of COVID-19 doses. They are Maharashtra, Rajasthan, and Gujarat.
COVAXIN and COVISHIELD are the two major COVID-19 vaccines that are currently administered in India.

So far, India has shipped 64 million doses of vaccines to 84 countries in the Caribbean, Africa, and Asia. The major recipient countries of the Indian COVID-19 vaccines are Mexico, Canada, and Brazil.
The GoI has planned to cover 250 million people included in the “high priority” category by July 2021 under its vaccination programme.

The PS Zoroaster is the fourth made-in-India patrol boat developed for Seychelles since 2005. The other vessels gifted by India include PS Topaz (2005), PS Constant (2014), Patrol Boat Hermes (2016).

The 48.9-metre patrol boat has been built by Garden Reach Shipbuilders and Engineering at an estimated cost of Rs 100 crore.

The vessel has a top speed of 35 knots and an endurance of 1,500 nautical miles.
It will be used for multi-purpose operations, such as patrolling, anti-smuggling and anti-poaching operations, and search and rescue.

3. Niger President Bazoum Names Mahamadou as New Prime Minister
Niger President Mohamed Bazoum appointed Ouhoumoudou Mahamadou to head his new cabinet as the country’s new prime minister. He was previously served as a minister in charge of the finance and mining portfolios.

He was the chief of staff to former President Mahamadou Issoufou between 2015 and 2021. He was sworn as Niger’s first democratic transition of power since independence in 1960.

The company, which is a joint venture between India’s largest lender, State Bank of India, and Europe’s largest asset manager, Amundi. The fund house’s SIP book has increased to ₹1,382 crores from ₹1,180 crores over the last year recording a growth of 17%.

5. Nirmala Sitharaman attends 103rd Development Committee Meeting of World Bank-IMF
Union Minister for Finance & Corporate Affairs Smt. Nirmala Sitharaman participated in the 103rd Meeting of the Development Committee Plenary, via video conferencing. During the meeting, she shared the measures taken to combat COVID-19 including social support measures for the poor and vulnerable, and relief measures for firms in statutory and regulatory compliance matters.

World Bank Group (WBG) and International Monetary Fund Support for Debt Relief Under the Common Framework and Beyond;

As a part of the meeting, Sitharaman also informed that the Government of India has announced Aatma Nirbhar Packages of Rs 27.1 trillion, which amounts to more than 13% of the GDP. These packages would provide social protection to the poor and vulnerable as well as push forward the economic reforms.

The Odisha sprinter became the first Indian woman to win a gold medal at the World University Games held in Italy in 2019. She is a silver-medalist in 100 and 200 metres at the 2018 Jakarta Asian Games. Apart from this, Dutee holds the national record of 11.22 secs in 100m.

The day marks the birth anniversary of German physician Dr Christian Friedrich Samuel Hahnemann, who is considered the founder of the system of alternative medicine called Homeopathy. The year 2021 marks the 266th birthday of Hahnemann.

The Central Council for Research in Homoeopathy (CCRH), Ministry of AYUSH, organised a two-day scientific conference on the occasion of #WorldHomoeopathyDay from April 10 & 11, 2021 in New Delhi.

The theme of the conference is “Homoeopathy – Roadmap for Integrative Medicine”
Objective: exchange of experience by policymakers and experts to identify strategic actions towards an effective and efficient inclusion of Homoeopathy in integrative care.

He was the longest-serving royal consort in British history who was a constant presence at Queen Elizabeth II’s side for decades.