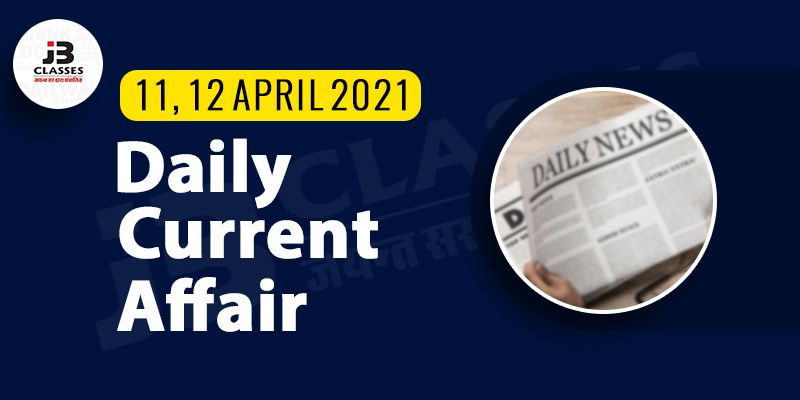 Here is the GK update of 11th and 12th April 2021 to help you prepare the Current affairs part. After reading this section, you can successfully attempt Current Affairs Quiz.

SARTHAQ, developed by the Department of School Education and Literacy, is an indicative and suggestive implementation plan for school education and was released as part of the celebrations leading to the Amrit Mahotsav on 75 years of India’s independence.

The plan keeps in mind the concurrent nature of education and adheres to the spirit of federalism. States and UTs are given the flexibility to adapt this plan with local contextualisation and also modify it as per their needs and requirements.

The RCEP must first be ratified by at least six ASEAN and three non-ASEAN member states to come into effect. Once implemented, RCEP would be the world’s largest free trade agreement, covering around one-third of the world’s population and about 30% of the world’s economy.

The RCEP was signed by the 15 participating countries in November 2020.
India had opted out of it in 2019.

Al-Matroushi works as an engineer at the Abu Dhabi-based National Petroleum Construction Co. Al-Mulla serves as a pilot with Dubai police and heads their training division. The two are set to head to NASA’s Johnson Space Center in Houston, Texas, for training. In 2019, Hazzaa Al-Mansoori became the UAE’s first astronaut. He spent a week on the International Space Station.

4. Odisha CM Naveen Patnaik launches ‘mask abhiyan’ against Covid-19
Odisha Chief Minister Naveen Patnaik has launched a 14-day “Mask Abhiyan” as part of efforts to prevent the spread of coronavirus in view of rising cases and urged people to strictly follow the safety guidelines. Chief Minister Naveen Patnaik sought their cooperation in turning the use of mask into a habit to tackle the current resurgence of the virus. Bringing an amendment to the Odisha Covid-19 Regulations under the Epidemic Diseases Act-1897.

In order to ensure that the 14 days mask Abhiyan gives results, the state government yesterday enhanced the fines for the violators from 1,000 rupees to 2000 rupees. Meanwhile, the state’s covid-19 active caseload mounted further to about 6000 with the detection of 1282 fresh cases yesterday, even as the state surpassed a milestone in administering more than 40 lakh vaccine doses as of date.

Sood catapulted to the national spotlight for feeding thousands of underprivileged people amid the COVID-19 pandemic. During his meeting with Punjab Chief Minister, the actor presented his book ‘I am no Messiah’, which he said captures the experiences of his journey from Moga to Mumbai.

The company claims that its newly introduced saving account is designed to offer consistent value, with assured rewards on different types of digital transactions throughout the year.

Airtel Payments Bank says that its Rewards123 savings bank account will give multiple benefits to users with annual earnings of up to ₹960.

In addition to that, users will get 1% cashback when they load ₹1,000 through UPI in their account. Users will get a maximum of ₹10 per month as a part of this benefit.

The Indian institutes are not even in the top 100 list, the best higher education institute, (IISc Bangalore) is in the category of 501- 600.

Apart from this the two Prime Ministers also agreed on instituting a ‘Strategic Partnership on Water’ to further deepen the Indo-Dutch cooperation in the water-related sector and upgrading the Joint Working Group on the water to Ministerial-level.

They also exchanged views on regional and global challenges such as climate change, counter-terrorism and the Covid-19 pandemic and agreed to leverage the emerging convergences in new areas like Indo-Pacific, Resilient Supply Chains and Global Digital Governance.

The prestigious award was given to Mr Yusuffali, who was born in Kerala, for his outstanding contribution to Abu Dhabi’s business, industry and support to various philanthropic initiatives.

Mr Yusuffali, the Chairman and Managing Director of Abu Dhabi-based LuLu Group which operates hypermarkets and retail companies in many countries, was honoured on Friday by the Crown Prince.

As a producer, Guneet has several critically acclaimed films to her credit. The list includes Masaan, Lunchbox, Haraamkhor, Peddlers; Oscar-winning short film documentary — Period, End of Sentence, among others.

This is one of the two KISCEs from Jammu & Kashmir. The other being the Maulana Azad Stadium for Fencing discipline in Jammu.

The day also marks the birth anniversary of Kasturba Gandhi, the wife of the father of Nation Mohan Das Karam Chand Gandhi.

The day marks the birthday of Dr James Parkinson from London, who was the first person to systematically described the six individuals with the symptoms of Parkinson Disease.

On 12 April 1961, was the date of the 1st human space flight was carried out by Yuri Gagarin, a Soviet citizen, who became the first person to journey into outer space.

This historic incident opened the way for space exploration for the benefit of all mankind. 12 April was also the date of the 1st Space Shuttle STS-1 of Columbia launched in 1981, which is also commemorated on this date.

The actor began his career in the early ’70s, juggling between Hindi and Punjabi films. While his popular Bollywood films include Ram Lakhan, Pyaar Toh Hona Hi Tha and Aunty No 1 etc.