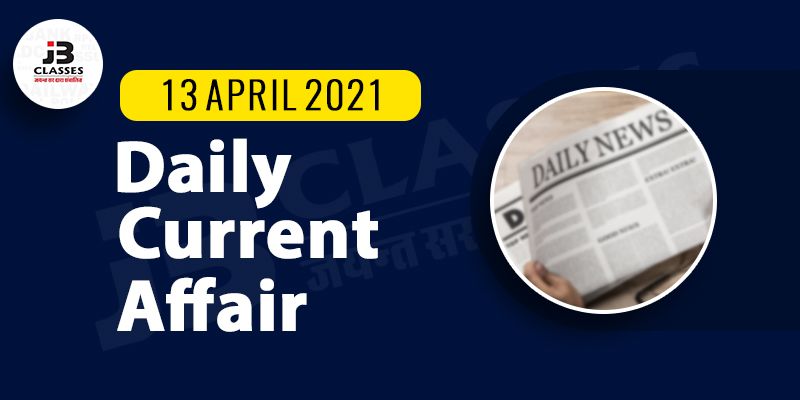 Here is the GK update of 13th April 2021 to help you prepare the Current affairs part. After reading this section, you can successfully attempt Current Affairs Quiz.

The Sanskrit learning app is part of the campaign being run by the Indian Council of Cultural Relations (ICCR) to promote the Sanskrit language among students, religious scholars, Indologists and historians across the world.

This app will help people who are already learning Sanskrit or those who are desirous to learn Sanskrit to do so in an easy manner based on games, competition, rewards, peer to peer interactions, etc.

This App combines education with entertainment, said a press release issued by the High Commission of India.

Money will be used to clean up dirty water by setting up a tertiary water treatment plant and supply piped water through water meters to places like Sahibabad.

Ghaziabad is debt-free and has maintained a revenue surplus position in the last few years, according to India Ratings.

3. Poonam Gupta to head NCAER as its first woman DG
Poonam Gupta will be the new director-general of the policy think tank National Council of Applied Economic Research (NCAER).

Gupta will succeed the current head of the think tank, Shekhar Shah, to become the first woman to hold the post. Currently, Gupta is the lead economist at the World Bank in Washington DC.

Prior to joining the World Bank in 2013, she was the Reserve Bank of India Chair Professor at the National Institute of Public Finance and Policy (NIPFP) and a professor of macroeconomics at the Indian Council for Research on International Economic Relations (ICRIER).

He will replace incumbent CEC, Sunil Arora, who will retire on April 12, 2021.

5. Bharti AXA Life and Fincare SFB join hands for bancassurance partnership
Bharti Axa Life and Fincare Small Finance Bank have joined hands for a bancassurance partnership under which the bank will sell insurance policies to its customers. This alliance will make life insurance solutions reachable to over 26.5 lakhs customers of Fincare Small Finance Bank and provide financial security to them.

Under the partnership, Bharti AXA Life Insurance will offer its comprehensive suite of life insurance products, including protection, savings and investment plans, to the customers of Fincare Small Finance Bank across its 747 branches and digital network presence across the country.

6. Axis Bank becomes co-promoter of Max Life Insurance
Axis Bank Ltd informed it has become co-promoters of Max Life Insurance Company Limited, after completion of the acquisition of 12.99% stake collectively by the Axis Entities in the company. Axis Bank and its two subsidiaries Axis Capital Limited and Axis Securities Limited will collectively own a 12.99% stake in Max Life after the consummation of the deal.

The Axis Entities have a right to acquire an additional stake of up to 7% in Max Life, in one or more tranches, subject to regulatory approvals. Insurance Regulatory and Development Authority of India (IRDAI) gave its formal approval in February of 2021.

7. Nomura slashes India’s GDP forecast to 12.6% in FY22
The Japanese brokerage company Nomura has revised the GDP forecast of India in the financial year 2021-22 (FY22) to 12.6 per cent from the previous estimate of 13.5 per cent, amid rising coronavirus cases and higher inflation.

Nomura has pegged the calendar year GDP growth at 11.5 per cent, a decline from 12.4 per cent estimated earlier.

8. 74th Edition of BAFTA Awards 2021 announced
The British Academy Film Awards (BAFTAs) for the year 2021, has been announced by the British Academy of Film and Television Arts. BAFTA 2021 is the 74th edition of the annual award to honour the best national and foreign films of 2020 and early 2021.

The winners were selected by AICTE (All India Council for Technical Education) in six sub-themes.

The Vaccine was developed by Gamaleya National Research Institute of Epidemiology and Microbiology last year in Russia.

The clinical trials of SPUTNIK V in India is being done by Dr Reddy’s Lab. The Hyderabad based, multinational Indian pharma company, Dr Reddy’s Lab has also inked an agreement with the Russian Direct Investment Fund, RDIF for the supply of the Russian vaccine in India.

The Subject Expert Committee of the Indian drug regulator had yesterday recommended SPUTNIK V for emergency use authorisation.

The vaccine has displayed robust results in its clinical trials in the country.

RDIF has claimed effectiveness of 91.6 per cent for the Sputnik V vaccine. Dr Reddy’s had applied for emergency use of Sputnik-V in February this year.

11. 102 years of Jallianwala Bagh Massacre
The Jallianwala Bagh massacre, also known as the Amritsar massacre, took place on 13 April 1919. This year we commemorate the 102nd anniversary of the terror that shook the entire country to a standstill.

The Jallianwalabagh garden has been converted into a memorial. And thousands of people on this day come to pay their respects to the martyred men, women, who were killed on that fateful day for the nation.

Acting Brigadier-General Reginald Dyer ordered troops of the British Indian Army to fire their rifles into a crowd of unarmed Indian civilians in Jallianwala Bagh, Amritsar, Punjab. General Dyer, the British India army officer, felt the people gathering for such a cause was anti-national.

He ordered the 50 of his troops consisting of Sikh, Gurkha, Baluchi, and Rajput to open fire on the unarmed men and women. The resulting figures would make you go numb as 379 men and women were killed for no fault of theirs and 1100 injured.