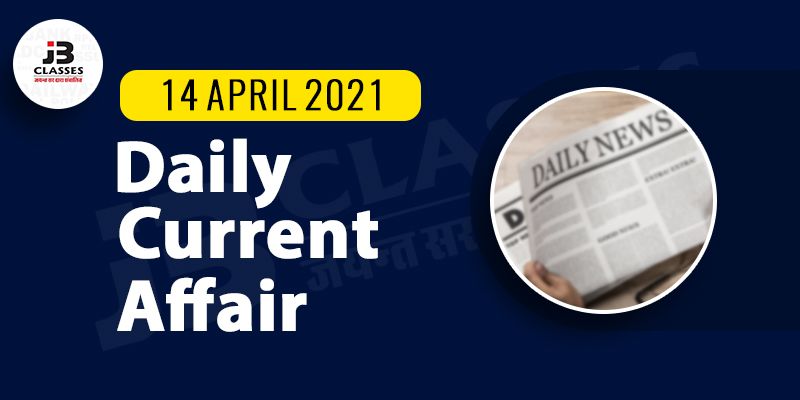 Here is the GK update of 14th April 2021 to help you prepare the Current affairs part. After reading this section, you can successfully attempt Current Affairs Quiz.

FSRU based LNG Terminals aim at providing the ability to enhance the pace of natural gas import capability in an environment-friendly and efficient manner”. The port is the first deepwater, 24×7 operational private port in Maharashtra.

He will replace Navin Agarwal who listed the creation of Athletes Biological Passport (ABP) for around 60 elite Indian sportspersons as one of the highlights of his tenure.

The conference is attended by the Air Officers Commanding-in-Chief of all Commands of IAF, all Principal Staff Officers and all Director Generals posted at Air Headquarters.

The conference of apex level leadership is aimed at addressing the issues of IAF’s operational capabilities in the times to come.

A series of discussions would be conducted over a period of three days to address strategies and policies related to capabilities that would give IAF a significant edge over its adversaries.

Various welfare and Human Resource measures to improve HR and administrative efficiency will also be discussed. The Conference provides a forum to the senior leadership of the IAF to discuss critical issues pertaining to Operations, Maintenance and Administration.

The Raisina Dialogue 2021 is the sixth edition of the annual dialogue, organised from April 13 to 16, 2021, in full digital form for the first time due to the coronavirus pandemic. Raisina Dialogue is India’s flagship conference on geopolitics and geoeconomics, organised annually since 2016.

The theme for the 2021 conference is “#ViralWorld: Outbreaks, Outliers and Out of Control”.

The four-day dialogue is jointly organised by the Ministry of External Affairs (MEA) and the think-tank Observer Research Foundation.

On the other hand, the Women’s team all-rounder Amelia Kerr was also honoured along with the upcoming star Devon Conway at the New Zealand Cricket Awards for the 2020-21 season.

The awards show, featuring presentations and related news stories will be available to the world’s media and broadcast extensively on Laureus social media platforms.

Among the many big names who have had a year to remember and who will be in contention for the awards are Rafael Nadal, Lewis Hamilton, LeBron James, Robert Lewandowski (Sportsman), Naomi Osaka, Federica Brignone (Sportswoman).

South African Lizelle Lee, who played four ODIs against India where she scored a century and two half-centuries to move to the top of Women’s ODI batting rankings, was named the ICC Women’s Player of the Month for March.

The WHO approved the designation of Chagas Disease Day on May 24, 2019, at the 72nd World Health Assembly. It is one of 11 official global public health campaigns marked by WHO.

The first World Chagas Disease Day was observed on 14 April 2020. The day has been named after Carlos Ribeiro Justiniano Chagas, the Brazilian doctor who diagnosed the first case on 14 April 1909.

The Day has been observed as an official public holiday throughout India since 2015. In 2021, we are marking the 130th birth anniversary of Babasaheb. Dr Ambedkar is known as the Father (chief architect) of the Indian Constitution.

He was the first Law and Justice Minister of the country after the independence. Dr Bhim has been bestowed with the country’s highest civilian honour, Bharat Ratna in 1990 posthumously.

The 2021 Turban Day marks the 552nd birth anniversary of Guru Nanak Dev and the festival of Baisakhi. The turban, also known as “dastar” or “pagri” or “pag” refer to the garment worn by both men and some women to cover their heads.

In 1962, he joined the Army as an emergency commissioned officer. He played for the Services hockey team in the national tournaments at Delhi. Singh retired as a Major in 1984 and later settled in Chandigarh.

Egyptologist Betsy Bryan has called the discovery ‘the second most important one since the tomb of Tutankhamun’.

Akhenaten, who left the ‘golden city’ for a new capital at Amarna, encouraged a startlingly different style of Egyptian art. Here he is shown with his wife, Nefertiti, and three daughters.