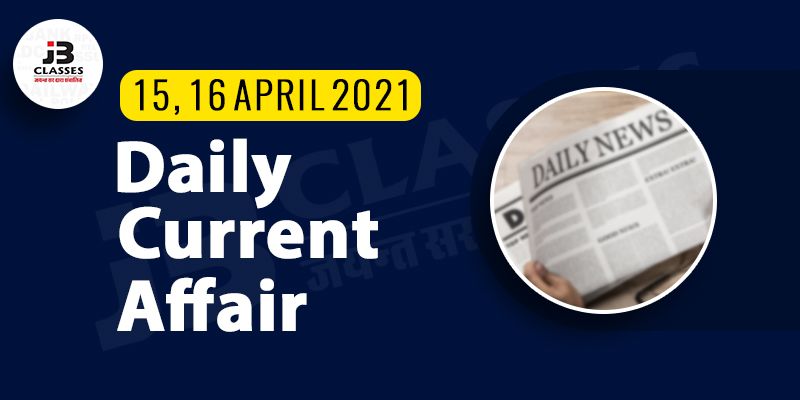 Here is the GK update of 15th and 16th April 2021 to help you prepare the Current affairs part. After reading this section, you can successfully attempt Current Affairs Quiz.

MANAS is an initiative of the Office of the Principal Scientific Adviser to the Government of India. It has been jointly executed by NIMHANS Bengaluru, AFMC Pune and C-DAC Bengaluru.

The app MANAS is developed under the Prime Minister’s Science, Technology, and Innovation Advisory Council (PM-STIAC), to promote wellbeing across age groups.

It will act as an alternative marketing tool between farmers & buyers by eliminating middlemen.
The platform will help the farmers to get a better price and the exporters to directly purchase quality products from the farmers and enhancing traceability.

US troops, as well as forces deployed by our NATO (North Atlantic Treaty Organization) Allies and operational partners, will be out of Afghanistan before the 20th anniversary of that heinous attack on September 11 (2001).

Biden and his team are refining national strategy to monitor and disrupt significant terrorist threats not only in Afghanistan, but anywhere they may arise — Africa, Europe, the Middle East, and elsewhere.

Before making the announcement, Biden had spoken with former US presidents Barack Obama and George Bush.

The US and the Taliban signed a landmark deal in Doha on February 29, 2020, to bring lasting peace in war-torn Afghanistan and allow US troops to return home from America’s longest war.

4. Indian-American Congressman Introduces Resolution “To Honour” BR Ambedkar
An Indian-American Congressman has introduced a resolution in the US House of Representatives for a second consecutive year to honour Bhimrao Ambedkar, the architect of India’s Constitution, on his 130th birth anniversary so that young leaders around the world can be inspired by his vision for equality.

The resolution states that Dr Ambedkar’s contributions to economics, political science, civil rights, religious harmony, and jurisprudence have had a profound impact around the world, promoting democratic values, unfettered equality, and justice for peoples of all castes, races, genders, religions, and backgrounds.

Four districts of Mandi, Chamba, Mahasu and Sirmour were integrated with over two dozen princely states, leading to the formation of Himachal Pradesh as a Union Territory in 1948.

Decades later, in 1971, Himachal Pradesh became the 18th state in India with Shimla as its capital.

The festival date is set according to the lunisolar Bengali calendar as the first day of its first month Baishakh. However, the festival falls on April 14 or April 15 every year in India.

In Bengali, Pohela stands for ‘first’ and Boishakh is the first month of the Bengali calendar. The festival is celebrated with processions, fairs and family time. Bengalis all over the world celebrate New Year by on this day by greeting each other by saying Shubho Nobobarsho.

7. RBI to set up Regulations Review Authority for one year
The Reserve Bank of India (RBI) will be set up a new Regulations Review Authority (RRA 2.0) from May 1, 2021, to review the regulations, circulars, reporting systems and compliance procedures of the central bank for streamlining them and making them more effective. The RRA will be set up for a period of one year unless the timeline is extended by the RBI.

M Rajeshwar Rao, Deputy Governor, RBI will be the head of the Regulations Review Authority.
RRA will be tasked with making regulatory and supervisory instructions more effective by removing redundancies and duplications if any.

It must be noted that prior to this, a similar RRA was set up by RBI on April 1, 1999, for a period of one year to review the regulations, circulars, reporting systems, based on the feedback from the public, banks, and financial institutions.

This facility will enable the customers to avail all banking services under one roof, he said, adding, PNB@Ease outlets would boost the bank’s distribution capability and lower the cost of customer acquisition.

The service can range from savings accounts opening to availing various loans and more, without visiting a branch or help from the bank employees.

As a part of its first investment through the ‘Smbhav’ fund, Amazon invested in Gurugram-based M1xchange which connects SMEs with banks and financiers.

Joseph Jouthe served as the Prime Minister of Haiti from March 4, 2020, until April 14, 2021. President Jovenel Moise has nominated Claude Joseph as the new prime minister of Haiti.

11. India sign MoU with France for cooperation on Gaganyaan Mission
The Indian space agency, ISRO has signed an agreement with the space agency of France CNES for cooperation in its first human space mission, Gaganyaan. CNES will train Indian flight physicians and CAPCOM mission control teams at French facilities.

The Gaganyaan orbital spacecraft project was kicked off in August 2018. It originally intended to send astronauts from Indian soil to mark the 75th anniversary of India’s independence in 2022.
CNES will provide equipment developed by it, tested and still operating aboard the International Space Station (ISS) to Indian crews.

It will also supply fireproof carry bags made in France to shield equipment from shocks and radiation.

The agreement provides for the CNES to support the implementation of a scientific experiment plan on validation missions, exchange information on food packaging and the nutrition programme, and above all the use by Indian astronauts of French equipment, consumables and medical instruments.

12. India ranks 49th in Inclusive Internet Index 2021
The Economist Intelligence Unit (EIU), in partnership with Facebook, has released the Inclusive Internet Index 2021. India has been ranked at 49th spot globally. It shares its rank with Thailand.
This index measures the extent to which the internet is available and affordable by region, and highlights additional insight into how people around the world are using the web.

The ‘Inclusive Internet Index’ surveyed 120 countries, representing 98 per cent of global GDP and 96 per cent of the global population.

The overall Index score is based on four parameters, which are: Availability, Affordability, Relevance and Readiness categories. The Inclusive Internet Index is commissioned by Facebook and developed by The Economist Intelligence Unit.

The unique feature of the repository is that it has a crowdsourcing feature that allows anyone to submit communication material for inclusion on the website, followed by a review by a designated committee.

Poshan Gyan repository enables the search of communication materials on 14 thematic areas of health and nutrition across diverse languages, media types, target audiences and sources.
Content for the repository has been sourced from the Ministries of Health and Family Welfare and Women and Child Development and developmental organizations.

14. ‘Aahaar Kranti’ mission launched by Health Ministry
Union Health Minister, Dr Harsh Vardhan has launched Aahaar Kranti, a mission dedicated to spreading awareness about nutrition. It is designed to address the peculiar problem of hunger and diseases in abundance, being faced by India and the world.

The movement proposes to address the problem by working to rouse the people to the values and richness of India’s traditional diet, to the healing powers of local fruits and vegetables and to the miracles of a balanced diet. Vijnana Bharati, Global Indian Scientists and Technocrats Forum, Vigyan Prasar, and Pravasi Bharatiya Academic and Scientific Sampark have come together to launch this mission.

So far, this film has won over 45 awards and recognitions at various international film festivals. The film is yet to be released in India. The film revolves around a pug and two boys, who are around 10 years old.

16. A ‘Healthy normal’ Monsoon forecasts by Skymet
Skymet has released its monsoon forecast for 2021. Skymet expects the upcoming monsoon to be ‘healthy normal’ to the tune of 103% (with an error margin of +/- 5%) of the long period average (LPA) of 880.6 mm for the 4-month period from June to September.

The North India plains along with a few parts of northeast India are at risk of being rain deficient through the season.

The Indian Ocean Dipole, characterised by a temperature gradient in the western and eastern Indian Ocean. It is expected to be slightly on the negative. Usually a positive dipole aids the monsoon.
During the season in India, the monsoon in 2019 and 2020 was only the third time in a century of back-to-back years of above normal rainfall.

17. World Voice Day: 16 April
The World Voice Day (WVD) is celebrated globally on April 16 every year to demonstrate the enormous importance of the voice in the daily lives of all people.

The Day is a global annual event dedicated to recognizing the boundless limits of the human voice. The mission is to share the excitement of the voice phenomenon with people, scientists, and other funding bodies.

The portal shall enable them to file their application and other atrocity and services related grievances online and to get them addressed in a time bound manner.

NCSC aims to streamline the grievance redressal specially of the Scheduled Caste population through this portal.

The portal designed in collaboration with the Bhaskaracharya Institute for Space Applications and Geoinformatics (BISAG-N), a Centre of Excellence under the Ministry of Electronics and Information Technology, Government of India will facilitate an end-to-end e-filing of complaints and grievances and their tracking.

After multiple rounds of evaluation of all the applications that were submitted in response to the ‘Request for Expression of Interest (REOI)’ under Mission COVID Suraksha for the development of covid-19 vaccine candidate(s)’.