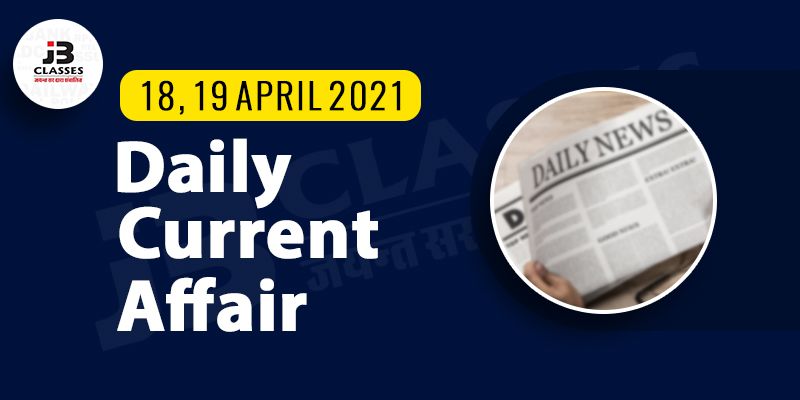 Here is the GK update of 18th and 19th April 2021 to help you prepare the Current affairs part. After reading this section, you can successfully attempt Current Affairs Quiz.

The main objective of the Gender Samvaad event was to create awareness of gender-related interventions under the DAY-NRLM. DAY-NRLM is Deendayal Antyodaya Yojana National Rural Livelihood Mission.

IWWAGE is Initiative for What Works to Advance Women and Girls in the Economy.
It provides opportunities to understand the best practices of other states to improve women agencies.

2. Italy launches first ever mega food park in India
Italy has launched its first-ever mega food park project in India, at Fanidhar in the Mehsana district of Gujarat. The project aims to create synergy between agriculture and industry of the two countries and focuses on the research and development of new and more efficient technologies in the sector.
With this Italy also aims to explore the great opportunities offered by the Indian market. This is the first Italian-Indian food park project, an initiative in the food-processing field, which serves as a pillar of the partnership between India and Italy.

He was appointed as MD and CEO of DCB Bank in May 2009. Prior to joining DCB, Natrajan has worked with foreign banks Standard Chartered & Citibank.

This achievement concludes four successful decades of India’s scientific endeavour in the continent of peace and cooperation.

5. NASA Awards $2.9 billion contract to SpaceX
The United States space agency National Aeronautics and Space Administration (NASA) has picked Elon Musk’s SpaceX for its Artemis programme, to develop the first commercial lander and take the next two US astronauts to the moon.

The total value of this contract is $2.89 billion.

SpaceX will develop a spacecraft ‘SpaceX Starship’ to land next to two US astronauts, including a women astronaut at the lunar south pole region, by 2024.

NASA also aims to bring the first person of colour to the moon’s surface as part of the Artemis programme.

This win is his first victory of the season. The race was the second round of the 2021 Formula One World Championship.

The event was the 34th edition of the Asian Wrestling Championships. India won 14 medals to stand in the third spot on the medal table.

The medals include 5 Gold, 3 Silver & 6 Bronze Medals. Iran and Kazakhstan topped the medal tally with 17 medals each.

The gold medal went to Hou Zhihui of China who created a new world record in snatch. Asian Games, held once every 4yrs, is the 2nd largest multi-sport event after Olympics.

This year’s theme “Complex Pasts: Diverse Futures” reflects on the need to acknowledge global calls for greater inclusion and recognition of diversity.

The International Council on Monuments and Sites (ICOMOS) in 1982 announced, 18 April as the World Heritage Day. This was approved by the General Assembly of UNESCO in 1983, with an aim of enhancing awareness about the importance of cultural heritage, monuments and conserving them.

Liver diseases can be caused by hepatitis A, B, C, alcohol and drugs. Viral Hepatitis occurs due to consumption of contaminated food and water, unsafe sexual practices and drug abuse.

12. Former Footballer Ahmed Hussain Passes Away
Former India International Football defender, Ahmed Hussain Lala has passed away due to COVID-19. He represented India in the 1956 Melbourne Olympics, where India finished fourth. Besides, he was also part of the Indian team that won the gold medal in the 1951 Asian Games.

The actor was awarded the Padma Shri in 2009 for his excellent work in Tamil cinema. He acted in over 200 movies. He was last seen in Dharala Prabhu, which was the Tamil remake of the Hindi film Vicky Donor.

Empty tankers will begin their journey from Kalamboli and Boisar railway stations in and near Mumbai to load liquid medical oxygen from Vizag, Jamshedpur, Rourkela and Bokaro, the national transporter.