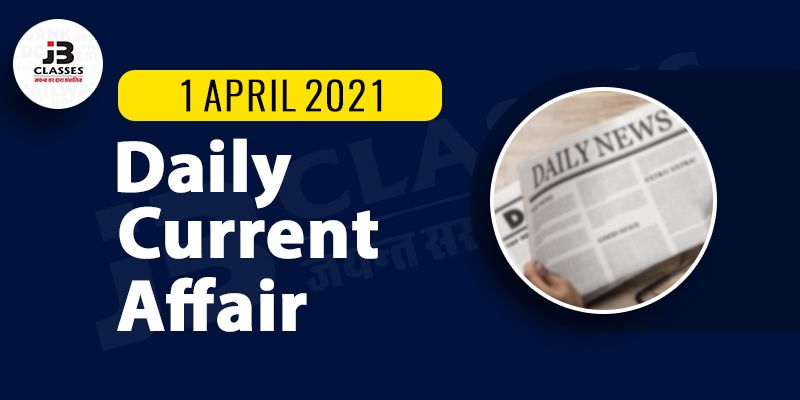 Here is the GK update of 01st April 2021 to help you prepare the Current affairs part. After reading this section, you can successfully attempt Current Affairs Quiz.

Additionally, the government has also introduced certain modifications in the ECLGS scheme to further contribute towards economic revival.

The limit of credit has been enhanced to 40 per cent of outstanding loans as of February 29, 2020. This limit was 20 per cent earlier.

The scheme would now also cover borrowers with total credit outstanding up to Rs 500 crore, with overdues for 60 days or less on February 29 2020, as compared to 30 days overdue earlier.

The tenor of loans granted under ECLGS 3.0 is 6 years with a moratorium period of 2 years on repayment of principal. In ECLGS 2.0, the tenor was five years with a 12-month moratorium.

Further, the scheme has also introduced providing an incentive to MLIs (member lending institutions) to enable the availability of additional funding facility to the eligible beneficiaries.

The ECLGS was announced as part of the Aatma Nirbhar Bharat Package of Central Government to provide fully guaranteed and collateral-free additional credit to MSMEs, business enterprises, individual loans for business purposes and MUDRA borrowers.

This infusion will complete the government’s total capital infusion of Rs 20,000 crore in public sector banks for the current financial year 2020-21. Earlier in December 2020, it infused Rs 5,500 crore in Punjab and Sind Bank.

The Recapitalisation bonds will be issued with six different maturities, and the special securities would be “at par” for the amount as per the application made by the eligible banks.

Banks require capital to meet the mandatory reserve requirements laid out by the Reserve Bank of India (RBI), make provisions for bad loans and kick-start the lending cycle when demand revives in the economy.

3. Utkal Divas or Odisha Day is celebrated on 1 April
Utkal Divas or Utakala Dibasha is celebrated on April 1 every year to remember the formation of the Odisha state after a struggle to be recognised as an independent state. Under British rule, Odisha was part of the Bengal presidency, which consisted of the present-day Bihar, West Bengal, and Odisha.

The state was originally called Orissa but the Lok Sabha passed the Orissa Bill, and Constitution Bill (113rd amendment), in March 2011 to rename it Odisha.

The new province of Odisha was formed after people’s continued struggle, which finally paid off on April 1, 1936. Sir John Hubbak was the first governor of the state. Notable leaders from that movement are Utkala Gouraba, Madhusudan Das, Utkala Mani, Gopabandhu Das, Fakir Mohan Senapati, Pandita Nilakantha Das, and many others.

The loan is in the form of refinancing against the funding support provided to the manufacturers, suppliers and dealers of Japanese automobiles in India.

This collaboration between SBI and JBIC will help the bank in extending loan facility to the entire supply chain at a time when people are preferring a personal mode of transport.

Now the total loan facility between SBI and JBIC has become $2 billion. Earlier in October 2020, SBI inked a similar agreement for $1 billion with JBIC.

Earlier in December 2020, RBI had directed all banks including RRBs, NBFCs, and payment gateways that the processing of recurring transactions (domestic or cross-border) using cards or Prepaid Payment Instruments (PPIs) or Unified Payments Interface (UPI) would not be continued beyond March 31, 2021, if they do not comply with Additional Factor of Authentication (AFA).

The agreement was entered on March 31, 2021, and the transaction is subject to approval by the UK Financial Regulator, the Prudential Regulation Authority (PRA).

The consideration or the value for the transaction would be the completion net asset value (book value of the bank on the date of completion), plus a fixed premium of $5,500,000.

Axis Bank expects the sale to be completed by September 30, 2021 subject to the approval of ‘Change in Control’, received from the UK Financial Regulator, the PRA.

According to Budget 2021-22, the estimated gross borrowing is pegged at Rs 12.05 lakh crore in the financial year beginning April 01, 2021. The government raises money from the market to fund its fiscal deficit through dated securities and treasury bills.

9. AYUSH Ministry in collab with Vinoba Seva Pratishthan organizes ‘Ayurveda Parav’
In a bid to promote Ayurveda as the mainstream treatment for the prevalent lifestyle-related diseases, Vinoba SevaPratisthan (VSP), in collaboration with the Ministry of AYUSH, has successfully organized a 3-day “Ayurveda Paravin Bhubaneswar.

This unique initiative aims to not only ensure greater acceptance of Ayurveda among the masses but also to popularize Ayurveda as the main line of treatment for the current lifestyle diseases.

The Ministry of AYUSH provided full-fledged support to this programme. During this Parv, nearly 25 research papers were presented by experts and researchers. The initiative generated tremendous response as thousands of patients turned up and showed their trust towards Ayurveda medication. They did get their diagnosis and consequent medicine.

11. PAN-Aadhaar linking deadline extended to June 30
The central government has extended the deadline for linking the Aadhaar number with the permanent account number (PAN) to June 30, 2021, in view of the difficulties arising out of the COVID-19 pandemic.

The earlier deadline was March 31. The government had said those who miss the deadline will be liable to pay a penalty of up to Rs 1,000 and their PAN will become invalid.

The date for issue of notice under Section 148 of Income Tax Act,1961, the passing of consequential order for direction issued by the Dispute Resolution Panel (DRP) and processing of equalisation levy statements has also been extended to 30th April 2021.

The government passed the Finance Bill 2021 in the Lok Sabha last week where it inserted a new section 234H under which a person shall be liable to pay a late fee of up to Rs 1,000 in case of non-linking of their PAN with Aadhaar.