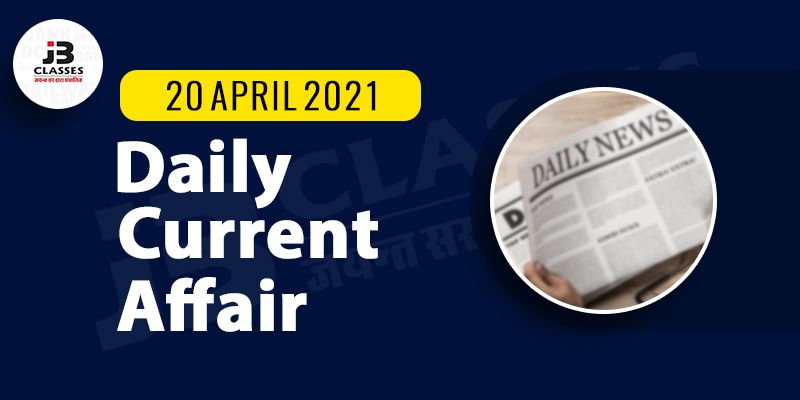 Here is the GK update of 20th April 2021 to help you prepare the Current affairs part. After reading this section, you can successfully attempt Current Affairs Quiz

The government has approved Rs. 945 Crore corpus for the fund, which will be divided over the next 4 years beginning April 01, 2021, for providing seed funding to eligible startups through eligible incubators across India. The scheme is expected to support an estimated 3,600 startups through 300 incubators.

To ensure transparency and accountability, Punjab has set up a well-equipped digital 24×7 call centre with Interactive Voice Responsive System. This analog grievance redressal system was upgraded in December 2020. Last year, the redressal rate was 97.76%.

The pending complaints daily monitoring is done by sending reminders to the Executive Engineer via SMS, What’s App messages, e-mail and over the phone.

3. New Zealand Makes World’s 1st Climate Change Law For Financial Firms
New Zealand is about to become the world’s first country to bring a law into force that demands environmental accountability from financial firms by asking them to report on how their businesses affect climate change.

The aim is to bring the financial sector on board with the efforts being made towards achieving the country’s target of becoming carbon neutral by 2050.

The New Zealand government first revealed its plans to compel the financial sector to make disclosures in September last year, informing that those unable to disclose would have to give explanations.

India stands at number 84 on the list, as the Indian citizens can visit Visa-Free or Visa-on-Arrival in over 58 places. Japan, Singapore and Germany, South Korea stand in Top 3 respectively.

The Henley Passport Index releases list which measures the world’s most travel-friendly passports. The index ranks the countries based on how strong their passport is.

5. RBI sets up committee to review working of ARCs
The Reserve Bank of India (RBI) has constituted a six-member panel to carry out a comprehensive review of the working of Asset Reconstruction Companies (ARCs) in the financial sector ecosystem.
The panel will be headed by former Executive Director of RBI, Sudarshan Sen.

This automatic system delivers supplemental oxygen based on the SpO2 (blood oxygen saturation) levels & prevents the person from sinking into a state of hypoxia, which is fatal in most cases.

Following a tie-up with another payment gateway earlier, the country’s largest life insurer has sought a new deal as the majority of its payments have moved to digital modes.

The PSU insurer collects premiums worth Rs 60,000 crore via digital mode, which doesn’t comprise payments made through banks.

8. ‘The Christmas Pig’: JK Rowling to release new children’s book in October
JK Rowling has a new book coming this autumn, a festive children’s story with all new characters. The story is about a boy named Jack and his toy Dur Pig, who goes missing on Christmas Eve.

The book is set to be released worldwide on Oct. 12. “The Christmas Pig” is Rowling’s first children’s novel since Harry Potter.

9. Stefanos Tsitsipas Wins Monte Carlo 2021 Title
Stefanos Tsitsipas has won his first ATP Masters 1000 series after a flawless performance against Andrey Rublev in Monte Carlo. The Greek star had lost his previous two finals at this level, with Rafael Nadal denying him in Toronto and Novak Djokovic beating him in Madrid.

Rublev beat 11-time Monte Carlo champion Nadal in the quarter-finals. Rublev knocked out Roberto Bautista Agut, Rafael Nadal and Dan Evans en route to the final but could not find a way past Tsitsipas.

The day celebrates multilingualism and cultural diversity as well as promote equal use of all six of its official working languages throughout the organization.

He was commonly known as a walking encyclopedia of Kannada language and culture, in his literary circles.

12. National Award-winning filmmaker Sumitra Bhave passes away
Acclaimed Marathi filmmaker, Sumitra Bhave has passed away. Sumitra Bhave was popular as a duo with filmmaker Sunil Sukthankar in Marathi cinema and Marathi theatre. She was known for her out-of-the-box content and also for the way she handled social issues in her films.

He had served as the Union Minister of State for Science and Technology in the Atal Bihari Vajpayee government.