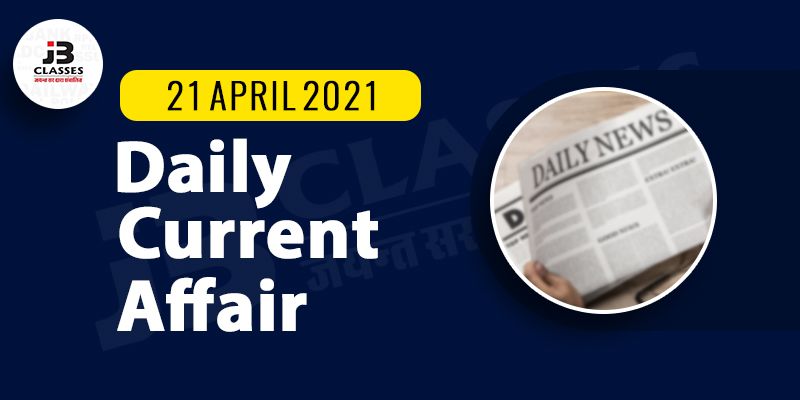 Here is the GK update of 21st April 2021 to help you prepare the Current affairs part. After reading this section, you can successfully attempt Current Affairs Quiz.

The online exhibition has been titled “Rama Katha: The Story of Rama Through Indian Miniatures”. It showcases 49 miniature paintings collections from different art schools of India, from the 17th through the 19th century. The collection of the painting has been taken from National Museum, New Delhi.

Díaz-Canel now holds Cuba’s two most important positions, head of the party and president of the state.

So far, a total of Rs 4, 879 crores have been disbursed under the Jagananna Vidya Deevena Scheme.

The main objective of the Jagananna Vidya Deevena Scheme is to provide scholarships to all the students who are not able to pay their fees because of their financial burden.

The scheme mainly focuses on students seeking higher education. It aims to provide fee reimbursement to more than 14 lakh students of the state.

The scheme will directly credit the amount into the accounts of students’ mothers. Earlier, the money was transferred to the owners of the colleges.

4. JMM first party to declare name of electoral bonds donor
The Jharkhand Mukti Morcha (JMM) is the first party that has declared the name of the entity which made donations to it through electoral bonds. A declaration of a ₹1 crore donation was made in the party’s 2019-20 contribution report.

According to the contribution report of the ruling party in Jharkhand, the donation was made by aluminium and copper manufacturing company Hindalco.

In a new report, the association said the most common and popular source of income for national and regional political parties in 2019-20 were donations through electoral bonds.

This raises the question as to whether political parties are aware of the identity of the donors who have contributions through electoral bonds, as can be seen in this case.

Norway has retained its top spot for the fifth year running, followed by Finland and Denmark at second and third place respectively. Eritrea is at the bottom of the index at 180th place.

The index is published every year by the international journalism not-for-profit body, “Reporters Without Borders (RSF)”, to evaluate the press freedom situation in 180 countries and territories.

The project titled ‘Cities Combating Plastic Entering the Marine Environment’ will be implemented for a period of three and a half years.

The outcome of the project is completely in line with the objectives of Swachh Bharat Mission-Urban focusing on sustainable solid waste management and Prime Minister Modi’s vision to phase out single-use plastic by 2022.

Data and images from the autonomous flight were transmitted 173 million miles (278 million kilometres) back to Earth where they were received by NASA’s array of ground antennas and processed more than three hours later.

Ingenuity was on autopilot for its entire flight, out of sight, direct control, or contact with the men and women on Earth who had ordered it aloft—because radio signals take too long to travel between the planets for any human operator to intervene.

The mini 4-pound (1.8-kilogram) copter even carried a bit of wing fabric from the Wright Flyer that made similar history at Kitty Hawk, North Carolina, in 1903.

The main objective of the day is to encourage people to use new ideas, make new decisions, and do creative thinking. Creativity is what makes the world go ‘round.

World Creativity and Innovation Day (WCID) was founded on 25 May 2001 in Toronto, Canada. The founder of the day was the Canadian Marci Segal. Segal was studying creativity in 1977 at the International Center for Studies in Creativity.

9. National Civil Services Day: 21 April
In India, ‘Civil Services Day is celebrated on April 21 every year. It is a day to appreciate the tremendous work done by officers engaged in public administration, in various departments of the central and state governments.

The Government of India chose April 21 as the National Civil Service Day as on this day the country’s first home minister, Sardar Vallabhbhai Patel addressed the newly appointed Administrative Services Officers in 1947.

The historic occasion took place at the Metcalf House in Delhi. In his address, he called Civil Servants, the ‘Steel Frame of India’.

He was the 13th Governor of RBI and served from May 2, 1977, to November 30, 1977.  He was known for being the chair of two high-powered committees on banking and financial sector reforms.

Mount Annapurna is a massif in the Himalayas located in Nepal that includes one peak over 8,000 metres and is considered to be one of the toughest mountains to climb.

ITBP’s Mountaineering and Skiing Institute at Auli will independently run this institution, which will impart training in aero, water and land-related sports and adventure activities.