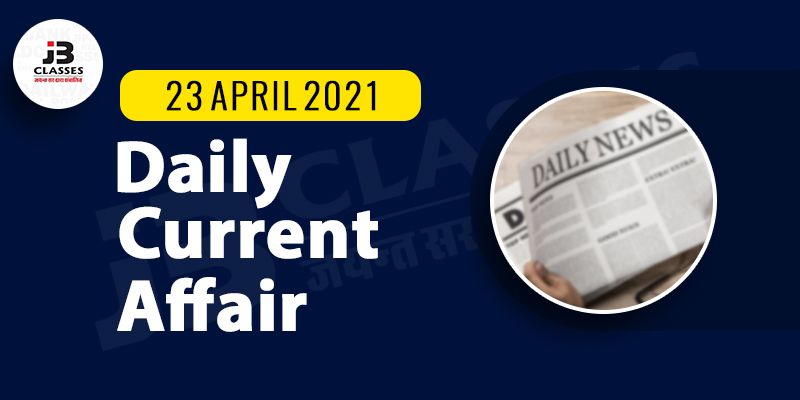 Here is the GK update of 23rd April 2021 to help you prepare the Current affairs part. After reading this section, you can successfully attempt Current Affairs Quiz.

1. CAG GC Murmu selected as external auditor for Hague
India’s Comptroller and Auditor General (CAG), GC Murmu has been chosen as the external auditor by the Hague-based Conference of State Parties of the Organisation for the Prohibition of Chemical Weapons (OPCW), for a three-year term starting 2021.

India was also selected as a member of the executive council of the OPCW representing the Asia group for another two-year term.

2. Rekha Menon takes over as first woman chairperson of Nasscom
Accenture India’s chairperson, Rekha M Menon has been appointed as chairperson of the National Association of Software and Services Companies (NASSCOM), becoming the first woman to take the top role in the software lobby group’s 30-year history.

She succeeds U B Pravin Rao, chief operating officer of Infosys as Nasscom’s chairperson. TCS President Krishnan Ramanujam will be the vice-chairperson.

In terms of the sovereign rating, S&P currently has a ‘BBB-‘ rating on India with a stable outlook. Earlier, for 2020-21, the S&P estimated the Indian economy to contract 8 per cent.

The Managing Director and CEO of Sambandh, Deepak Kindo, who was allegedly the main perpetrator of the fraud, has been arrested by Economic Offence Wing, Chennai.

According to the RBI norms, NBFC is required to maintain minimum capital levels consisting of Tier-I and Tier-II capital, of not less than 15 per cent of their aggregate risk-weighted assets.

The two-day conference has been organised virtually on 22-23 April 2021, which coincides with the fifth anniversary of the opening of the Paris Agreement on climate change for signature.
The theme of the summit: Our Collective Sprint to 2030.

A total of 40 national leaders have been invited by Biden to attend this two-day virtual climate summit.

The Summit is being held in the run-up to the United Nations Climate Change Conference (COP26) that will take place in November 2021 in Glasglow.

The theme of the conference – “A World in Change: Join Hands to Strengthen Global Governance and Advance Belt and Road Cooperation”.

The forum, now celebrating its 20th anniversary, has not only played a unique role in pooling consensus and putting forward valuable “Boao proposals,” but also engaged countries in addressing global issues and promoting world development and prosperity.

8. India Ranks 87th in WEF Global Energy Transition Index 2021
India is placed at the 87th position among 115 countries in the 2021 Energy Transition Index (ETI).
The report is published by the World Economic Forum (WEF), prepared in collaboration with Accenture to track nations on the current performance of their energy systems across various aspects.

Zimbabwe is the last ranked country in the index.

MOXIE works by separating oxygen atoms from carbon dioxide molecules, which are made up of one carbon atom and two oxygen atoms. MOXIE is expected to extract oxygen at least nine more times over the course of a Martian year (nearly two years on Earth).

April 23 is chosen because it marks the birth and death of several prominent authors. For instance, William Shakespeare, Miguel de Cervantes, and Josep Pla died on April 23 and Manuel Mejia Vallejo and Maurice Druon were born on April 23.

For the Spanish Language, the Day was chosen because the day is also observed as Hispanic Day in Spain, meaning the Spanish speaking world.

The brothers and their father Saeed Sabri performed qawwali at several events held in Indian and abroad.

He has written over 200 books on several aspects of Islam and is best known for having written a commentary on the Quran and its translation in English, Hindi and Urdu.

He was the recipient of several notable honours like Padma Vibhushan (2021), Padma Bhushan (2000) and the Rajiv Gandhi National Sadbhavna Award (2009).