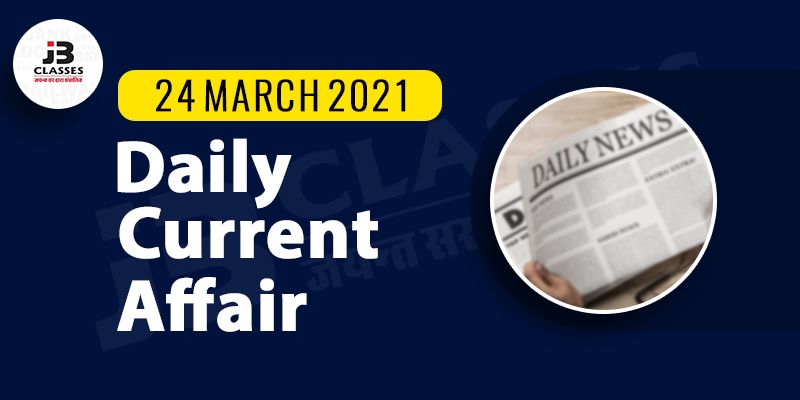 Here is the GK update of 24th March 2021 to help you prepare the Current affairs part. After reading this section, you can successfully attempt Current Affairs Quiz.

One of these satellites named ‘Challenge-1’ was the first-ever satellite made completely in Tunisia, which was created by the Telnet telecommunications group.

In 2018, a Soyuz rocket carrying a Russian cosmonaut and a NASA astronaut failed mid-flight, forcing the crew to carry out an emergency landing. Both survived without injuries.

2. Andhra Pradesh to launch India’s first Govt-Run Animal Ambulance Network
The state government of Andhra Pradesh has decided to set up “India’s first government-run ambulance network” for animals. This decision was taken in order to further boost the animal husbandry and veterinary sector in the state.

Ambulance network as one of its main missions in order to help in reaching out to the distressed animals to provide them with proper animal healthcare. The Animal Husbandry Department was directed to set up one Mobile Ambulance Veterinary Clinic at each of the assembly constituency.

A total of 175 mobile ambulances (veterinary) clinics will be placed at Assembly Constituency Level on the lines of 108 Services for providing Veterinary services at the doorstep.

3. UP and MP sign agreement with Jal Shakti Ministry for ‘Ken-Betwa Link’ project
On the occasion of World Water Day, the governments of Uttar Pradesh and Madhya Pradesh signed an agreement with the Union Ministry of Jal Shakti to implement the Ken-Betwa river interlinking project.

The main purpose of this project is to carry water from surplus regions to drought-prone and water-scarce region through the interlinking of rivers.
The surplus water will be transferred from the Ken river in Panna district in Madhya Pradesh to the Betwa river in Uttar Pradesh.

The project will benefit the Bundelkhand region of Uttar Pradesh, by resolving the water scarcity and thus bring prosperity to this region.
The water will be transferred through the construction of the Dhaudan Dam and a 221 km-long canal.

4. India, Japan agree for greater cooperation in patent verification
India and Japan have agreed to recognize each other’s offices to act mutually as competent International Searching and International Preliminary Examining Authority (ISA/IPEA) for any international patent application filed with them. This memorandum of cooperation on the industrial property was arrived at during the 4th review meeting between DPIIT and Japan Patent Office.

India had approved an MoC between the Indian Patent Office (IPO) and the JPO for entering into a PPH on a pilot basis for three years. This is a reciprocal arrangement, so the JPO will also be able to accelerate the prosecution of a Japanese application using positive examination results received from the IPO.

The IPO will only offer acceleration for patent applications in certain technical fields such as physics, computer science, IT, electronics, metallurgy and automobiles.

5. Pabbi-Anti-Terror 2021: India, Pakistan and China to hold anti-terror exercise
The eight-member bloc said that the decision to hold the joint exercise ‘Pabbi-Anti-Terror 2021’ was announced during the 36th meeting of the Council of the Regional Anti-Terrorist Structure (RATS) held in Tashkent, Uzbekistan. Members of the Shanghai Cooperation Organisation, including India, Pakistan and China, will hold a joint anti-terrorism exercise this year.

“Decisions have been made to improve cooperation between the competent authorities of the SCO member states in identifying and suppressing channels that finance terrorist activities.

The experiment was done at night to ensure that there is no interference from the direct sunlight. This is a major milestone achievement for unconditionally secured satellite data-communication using quantum technologies.

The top-order batsman is regarded as one of the most attacking and fluent stroke players in Indian cricket and he has played in 21 ODIs and 29 T20 Internationals for his country. The signing of Shreyas Iyer signals the latest step in Lancashire’s long association with Indian cricket, which stretches back more than 50 years when India wicketkeeper-batsman Farokh Engineer joined the county in 1968.

He would go on to become a Lancashire legend and now serves as a vice-president of the club. Since Engineer retired, four other Indian players — Murali Kartik, Dinesh Mongia, VVS Laxman, and Sourav Ganguly — have represented Lancashire.

With this, India has moved to third place in the medals table. India has now two medals on its list – one gold and one bronze.

The date marks the day in 1882 when Dr Robert Koch announced that he had discovered the bacterium that causes TB, which opened the way towards diagnosing and curing this disease.

The theme of World TB Day 2021 – ‘The Clock is Ticking’ –conveys the sense that the world is running out of time to act on the commitments to end TB made by global leaders. This is especially critical in the context of the COVID-19 pandemic that has put End TB progress at risk, and to ensure equitable access to prevention and care in line with WHO’s drive towards achieving Universal Health Coverage.

This day is observed on 24th March every year to pay tribute to “Monsignor Óscar Arnulfo Romero” as he was murdered on 24 March 1980. He was actively engaged in criticizing violations of the human rights of the most vulnerable individuals in El Salvador.

The International Day for the Right to the Truth Concerning Gross Human Rights Violations and for the Dignity of Victims aims to honour the memory of victims of gross and systematic human rights violations. It also aims to promote the importance of the right to truth and justice.

The portal has been certified by Standardisation, Testing and Quality Certification Directorate (STQC), under the Ministry of Electronics and Information Technology, GoI.

POWERGRID is the only organization in India to have an e-procurement solution on SAP Supplier Relationship Management (SRM), complying with all applicable requirements relating to security and transparency as stipulated by STQC.

The inauguration took place on the occasion of a programme organised by the University of Delhi on ‘Shaheed Diwas’ to pay homage and commemorate 90 years of the martyrdom of our national icons of the Indian National Movement –Shaheed Bhagat Singh, Sukhdev Thapar and Shivaram Rajguru.