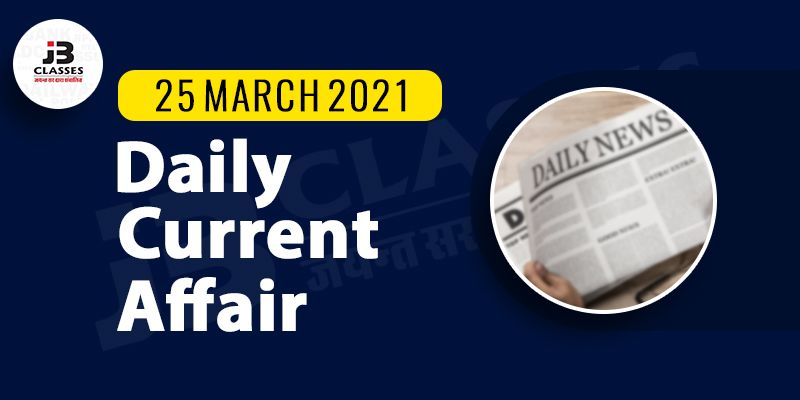 Here is the GK update of 25th March 2021 to help you prepare the Current affairs part. After reading this section, you can successfully attempt Current Affairs Quiz.

In a letter to the Law Ministry, CJI SA Bobde recommended Justice Ramana as his successor.
Justice NV Ramana is the most senior judge in the apex court after CJI Bobde.

On appointment, Justice NV Ramana will be the 48th Chief Justice of India and he will have a long tenure as CJI for over 16 months.

The agreement signed between the Central Bank of Sri Lanka and the People’s Bank of China is valid for three years.

China remains Sri Lanka’s largest source of imports. In 2020, imports from China amounted to USD 3.6 billion, or just over 22 per cent of Sri Lanka’s imports.

The deal comes as Sri Lanka is undergoing a difficult time with COVID-19, dealing a severe blow to its economy, especially its USD 4.5 billion tourism industry.

3. World’s first Ship Tunnel to be built in Norway
The Norwegian Coastal Administration has received the green signal to start working on the construction of the world’s first tunnel, being built exclusively for ships.

The tunnel is dubbed as “Stad Ship Tunnel” and would be built under the mountainous Stadhavet peninsula in northwestern Norway.

The 1.7 km tunnel will be able to handle ships of up to 16,000 tonnes and give ships a safer passage through the treacherous Stadhavet Sea.

It is estimated to cost at least 2.8 billion Norwegian kroner (NZ$460 million) the construction of this ship tunnel.

The construction would begin in 2022 and would take three to four years to complete.

4. World TB Day 2021: Kerala’s TB eradication programme bags national honour
Kerala’s tuberculosis eradication programme had won national honour as the state bagged the Union government’s award for reducing the prevalence of the disease through various systematic initiatives. Kerala is the only state had chosen for recognition in the state category.

The southern state has reduced the TB prevalence rate by 5 per cent in the last five years as part of achieving sustainable development goals.

The nation has set an ambitious goal to achieve “End Tuberculosis” by reducing the incidence of new TB cases by 80% by 2025, five years ahead of UN Sustainable Development Goals.

For opening an IOB Trendy account, a customer needs to be within the age bracket of 21 – 38 years.
The account may be self or jointly operated. In the case of a joint account, the primary holder has to be a millennial at the time of account opening.

There is no ‘Opening Balance’ requirement for IOB Trendy. So, no charges will be levied for the first month for non-maintenance of balance.

6. Fitch Ratings Projects India’s GDP to 12.8% for FY22
American credit rating agency, Fitch has revised India’s GDP growth estimate for the fiscal 2021-22 to 12.8%, from its previous estimate of 11%, in its latest Global Economic Outlook (GEO).
The improvement in GDP rate is based on factors like a stronger carryover effect, a looser fiscal stance, and better virus containment. Also, for the fiscal year 2022-23, Fitch expects GDP growth at 5.8%.

The 43-year-old Dr Murthy would occupy the position of America’s Surgeon General for the second time.

Prior to this, Dr Murthy was appointed as surgeon general under the Obama administration in 2011 but was fired by former President Trump in 2017.

The US Chamber of Commerce Global Innovation Policy Centre (GIPC), the Index evaluates Intellectual Property rights in 53 global economies from patent and copyright policies to commercialisation of IP assets and ratification of international treaties.

The 2021 Index illustrates that economies with the most effective IP frameworks are more likely to achieve the socio-economic benefits needed to combat COVID-19, including greater access to venture capital, increased private sector investment in research and development, and over 10 times more clinical trial activity.

The certification is the result of an employee survey conducted by the third-party global authority on recognising high-trust and performance culture at workplaces.

This recognition acknowledges the bank’s commitment and credibility amongst its employees.

The Vyas Samman started in 1991, is given by KK Birla Foundation for an outstanding literary work in Hindi authored by an Indian citizen published during the last 10 years. It carries an award of four lakh rupees along with a citation and plaque.

This day offers the opportunity to honour and remember those who suffered and died at the hands of the brutal slavery system. International Day also aims to raise awareness about the dangers of racism and prejudice today.

The day is marked each year on the anniversary of the abduction of Alec Collett, a former journalist who was working for the United Nations Relief and Works Agency for Palestine Refugees in the Near East (UNRWA) when he was abducted by armed gunman in 1985. His body was finally found in Lebanon’s Bekaa Valley in 2009.

This was India’s 8th gold medal in the ongoing World Cup. India continues to dominate the medal tally with 15 so far. India has won three silver medals and four bronze to go with the eight gold medals.

14. A book titled ‘My Experiments with Silence’ authored by Samir Soni
The book “My Experiments with Silence” is authored by Samir Soni on anxiety and self -discovery. Soni’s book aims to be a personal account of his dialogues with himself during his growing-up years in Delhi, his stint at Wall Street and his time in Bollywood.

The book will be published by OM Books International. Soni said his book will be an “ode to anyone who has fought or is fighting their inner demons”.

15. Acclaimed Polish Poet Adam Zagajewski passes away
Renowned Polish poet Adam Zagajewski has passed away. He was a leading figure in Poland’s New Wave or Generation ’68, a literary movement of the late 1960s that called for a simple language to relate directly to reality.

Zagajewski’s “Try to Praise the Mutilated World,” was translated into English by Clare Cavanaugh and published in The New Yorker.