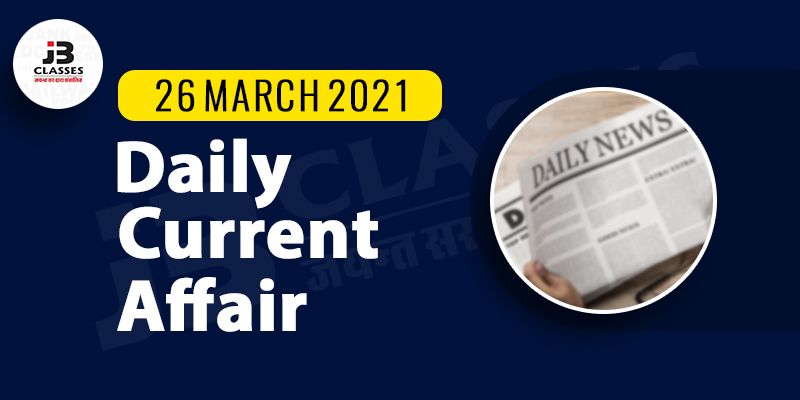 Here is the GK update of 26th March 2021 to help you prepare the Current affairs part. After reading this section, you can successfully attempt Current Affairs Quiz.

The two tech-enabled initiatives have been launched by the Ministry of Corporate Affairs to leverage digital solutions to achieve the Prime Minister’s vision of ‘Digitally empowered India.

The Mobile App will focus on financial literacy by spreading investors’ awareness, education, and protection among investors.

The Mobile App has been developed for citizen engagement and information dissemination to promote awareness among investors.

The Central Scrutiny Centre will scrutinize certain Straight Through Process (STP) Forms filed by the corporates on the MCA21 registry and flag the companies for more in-depth scrutiny.

This airport has been developed under the Regional Connectivity Scheme, Ude Desh Ka Aam Nagrik (RCS-UDAN).

Kurnool airport will bring the region closer to major hubs in South India by providing direct flight operations to Bangalore, Vishakhapatnam and Chennai.

This initiative is supported by Greater Visakhapatnam Municipal Corporation (GVMC) and project SEWAH (Sustainable Enterprises for Water and Health) – an alliance between USAID and SWN (Safe Water Network).

The kiosk will provide clean potable water from the air by making use of Maithri Aquatech’s Meghdoot solution as a source to generate water with no dependency on groundwater as well as surface water resources.

The kiosk will also function as a Water Knowledge Resource Centre (WRKC) by creating awareness and imparting necessary information to members of the local underserved communities as well as nearby schools on the benefits of good water, sanitation and hygiene (WASH) practices.

Since the pandemic began, the Office of the PSA has been among the key coordinating agencies with industry, research bodies, health and science ministries to accelerate the development of diagnostics, drugs and vaccines.

The PSA office has also been instrumental in formulating the National Science Innovation and Technology Policy as well as the forthcoming National Research Foundation.

Kumar is a 1993-batch IAS officer of Maharashtra cadre. The Appointments Committee of the Cabinet (ACC) has approved his appointment.

7. Saurabh Garg appointed as new CEO of UIDAI
Senior bureaucrat, Saurabh Garg has been appointed as the Chief Executive Officer (CEO) of Unique Identification Authority of India (UIDAI) as part of a bureaucratic reshuffle effected by the Centre.
Mr Garg is at present serving in his cadre state Odisha. He is a 1991 batch IAS officer.

The Appointments Committee of the Cabinet (ACC) has approved the appointment of Mr Garg as the CEO, UIDAI in the rank and pay of Additional Secretary, an order issued by the Personnel Ministry.

ICGS Vajra is the sixth vessel in the series of seven OPVs being built by L&T under a Ministry of Defence contract signed in the year 2015. Like the five OPVs in the series, ICGS Vajra was also delivered ahead of the contractual schedule.

Ms Bhosle, whose sister Lata Mangeshkar won the award for 1997, said she got to know from Mr Thackeray that she has been selected for the award for 2020. Ms Bhosle received the Dadasaheb Phalke Award for 2000.

The award, instituted in 1996 by the State government to recognise distinguished work and achievements of eminent persons from the State, representing different walks of life, carries a cash prize of ₹10 lakh and a citation.

The first Maharashtra Bhushan awardee was Marathi writer P.L. Deshpande and the last winner of this award was historian Babasaheb Purandare who got it for the year 2015.

Rijiju has written a reply in the Lok Sabha that the government has also given recognition to the National Yogasana Sports Federation (NYSF) for the promotion and development of Yogasana in the country.

An International Yogasana Sports Federation was formed under the presidentship of yoga guru Baba Ramdev with HR Nagendra as secretary-general in November 2019.

The Lt Governor observed that AYUSH Health & Wellness Centres would be a game-changer in the UT of J&K, especially in promoting the AYUSH sector, so that comprehensive primary health care through AYUSH principles and practices is provided to the community for achieving the basic objective of holistic wellness model by advocating self-care and home remedies amongst the community.

The team comprised Siddhant Samarth, Pratim Majumdar, Rishita Raj and Utkarsh Agrawal and were guided by Prof. Jenia Mukherjee (Department of Humanities and Social Sciences).
CoreNet Global is a non-profit association, headquartered in Atlanta, Georgia (US), representing more than 11,000 executives in 50 countries with strategic responsibility for the real estate assets of large corporations.

The organization’s mission is to advance the practice of corporate real estate through professional development opportunities, publications, research, conferences, designations and networking in 46 local chapters and networking groups globally.