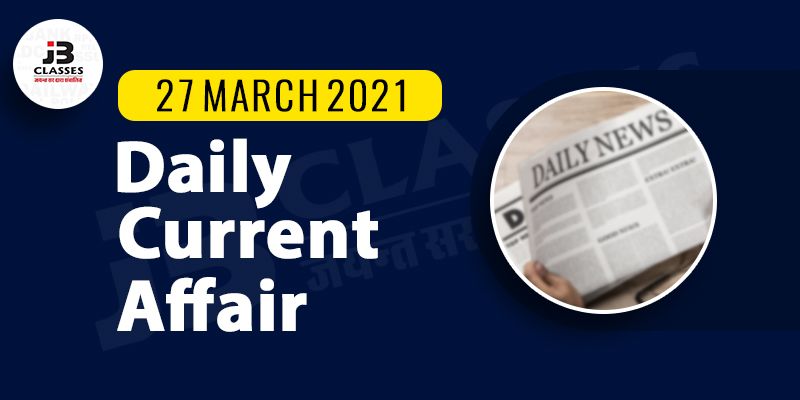 Here is the GK update of 27th March 2021 to help you prepare the Current affairs part. After reading this section, you can successfully attempt Current Affairs Quiz.

The African leader is one of the world’s longest-serving presidents, earning him the nickname “emperor.”He has led Congo for a total of 36 years. The former paratrooper first became president in 1979 and remained in power for three consecutive terms.

On March 26, 1971, Bangladesh was proclaimed as an independent nation by Sheikh Mujibur Rahman and this led to Bangladesh Liberation War when war ensued between Pakistan and Bangladesh liberation forces with Indian support.

It was 50 years ago on the night of March 25, 1971, that Pakistan’s military launched a violent crackdown on the city of Dhaka, then part of East Pakistan, to quell a rising nationalist movement seeking independence for what is today known as Bangladesh.

The fight for independence can be traced back to Britain’s colonial rule of the Indian subcontinent and the new nations that were carved out after its end in 1947.

There were India and Pakistan, the latter split into West Pakistan and East Pakistan. The war would rage until December when India joined on the side of Bangladesh.
Finally, on December 16, 1971, Pakistan forces surrendered and Bangladesh celebrated its freedom.

3. Anish Shah to take over as M&M’s Managing Director, CEO
Anish Shah who is set to take over as the managing director and CEO of Mahindra and Mahindra from 2 April will become the first professional executive to oversee the entire business of the $19.4 billion Mahindra Group. Pawan Goenka will retire as MD and CEO and member of the board effective April 2.

Group chairman Anand Mahindra will be taking on a non-executive role. The markets regulator Sebi has mandated that from April 2022 the chairperson of the board of top 500 listed entities must be a non-executive director and not be related to the MD or CEO.

The first-ever joint patrol between the navies reflects the growing defence ties between the two Indian Ocean neighbours aimed at the common objective of ensuring maritime security in the Indian Ocean Region (IOR).

The Joint exercise bears testimony to the growing bonds between the maritime forces of both the nations and aimed at common objectives of ensuring maritime security by India and Madagascar and interoperability between the two navies.

The prize is open to all genres – fiction, non-fiction, and poetry- from writers from around the world. It is the only prize in which all the books considered for the prize are selected and judged by an academy of peers, though there are three main judges.

Originally scheduled to be held from February 6 to March 7, 2021, the World Cup was postponed by a year due to the Covid-19 pandemic.

Earlier in the day, the Indian women’s team in the 50m Rifle 3 Positions event had to settle for a silver as they lost 43-47 to Poland in the gold medal match. India is dominating the standings with 21 medals, including 10 gold medals.

This day is a celebration for those who can see the value and importance of the art form “theatre”, and acts as a wake-up-call for governments, politicians and institutions which have not yet recognised its value to the people and to the individual and have not yet realised its potential for economic growth.

9. Earth Hour 2021: 27 March
Every year, the Earth Hour is celebrated worldwide on the last Saturday of March month to show support for the fight against climate change and commitment towards a better planet. Earth Hour 2021 is being marked on March 27, 2021. The Earth Hour 2021 theme will focus on “Climate Change to Save Earth.”

The Day is a worldwide movement organized by the World Wide Fund for Nature (WWF), encouraging individuals, communities, corporates, and households to turn off their lights for one hour, from 8:30 to 9:30 p.m.

It was started as a lights-off event in Sydney, Australia, in 2007 to raise awareness for energy consumption and its effects on the environment.

She has also acted in four Odia movies. Though he was an expert in Odissi and Gotipua dance forms, Kelucharan was then performing as a tabla player in the theatre.