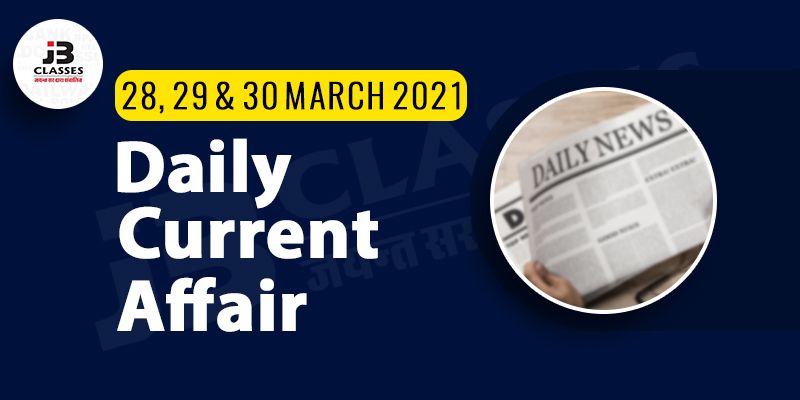 Here is the GK update of 28th, 29th and 30th March 2021 to help you prepare the Current affairs part. After reading this section, you can successfully attempt Current Affairs Quiz.

A Guidance Note on Joint Action Plan for Tuberculosis (TB) Elimination, a Special Edition of Tribal Ministry’s Publication ‘ALEKH’ on TB, and a document on Tribal Tuberculosis (TB) Initiative was also released at the event.

Over ten crore tribal population is living with a huge diversity in their population dynamics. He said the government has already increased the Budget allocation for TB in India four-fold in the last five years.

Dr Harsh Vardhan said the Union Territories of Lakshadweep and the district of Badgam in Jammu and Kashmir have been declared TB Free on World TB Day this year. During the function, Tribal Affairs Minister Arjun Munda was also present.

Noting the good cultivation of bananas in Kushinagar, products in the district made from banana fibre were selected in the ODOP scheme.

At least 4,000 farmers are linked to banana cultivation and after inclusion in the ODOP scheme, around 500 people are employed in its processing. There are three banana fibre processing units in the district and the construction of a Common Facility Centre (CFC) is also planned.

The state government launched the i-Learn application in partnership with USAID-NISHTHA/Jgpiego which will cater across the 189 Health & wellness centres in the state.

i-Learn is a learning management system for CHOs with self-facilitated learning for improving and learning new skills in clinical and non-clinical areas.

The state is committed to defeating the pandemic and as such it has rolled out several interventions including digital technology like the Naga Telehealth services.

The Naga Telehealth, a telemedicine platform launched just about six months ago has received a good response from the state’s own medical doctors and CHOs wherein more than 1000 teleconsultations have been conducted.

4. New Zealand passes miscarriages bereavement leave law
New Zealand’s parliament has passed legislation giving mothers and their partners the right to paid leave following a miscarriage or stillbirth, becoming only the second country in the world to do so. India is the only other country with similar legislation.

The leave provisions apply to mothers, their partners as well as parents planning to have a child through adoption or surrogacy. One in four New Zealand women has had a miscarriage.

The bill will give women and their partners time to come to terms with their loss without having to tap into sick leave. Because their grief is not a sickness, it is a loss. New Zealand was the first country in the world to give voting rights to women and has been a pioneer on issues around woman’s rights.

5. HDFC Bank Named India’s Best SME Bank by Asiamoney
HDFC Bank has adjudged the ‘India’s Best Bank for SMEs’ at the Asiamoney Best Bank Awards 2021. In its evaluation, the magazine said on its website – “HDFC Bank’s transformation of its micro, small and medium-sized enterprise (MSME) business over the past few years makes it a worthy winner of this award.”

The Annual Best Banks survey of the financial magazine based in Hong Kong aims to identify which banks in each market have excelled across a range of core banking activities over the past 12 months.

Asiamoney’s award decisions were made by a team of senior journalists after receiving detailed submissions from market participants and in conjunction with research into the banking and capital markets by our editorial committee. Senior editors also visited each country or territory to meet leading bankers and gather client and competitor feedback.

It has also raised the 2021 growth forecast for China to 8% from 7% on stronger-than-expected exports and lingering momentum in the property market.

It highlights the tremendous potential of the changing data landscape to improve the lives of poor people, at the same time acknowledging its potential to open back doors that can harm individuals, businesses, and societies.

Through this report, World Bank aims to support its client countries by identifying where public and private sector investments are the most critical, defining a rich program for policy reform and technical assistance, and highlighting areas in which global initiatives can help to convene and facilitate cross-border cooperation.

Mondal will have a two-year term starting April; she took charge of SAIL on January 1, 2021.
SCOPE is an apex professional organization representing the Central Public Sector Enterprises (CPSEs). It promotes excellence in organisations where public investment is involved, in order to enable them to be globally competitive.

10. US President Biden invites PM Modi to Leaders Summit on Climate
President Joe Biden has invited 40 world leaders, including Prime Minister Narendra Modi, to a US-hosted virtual summit on climate next month to underscore the urgency and the economic benefits of stronger climate action.

Biden will host a two-day climate summit of world leaders starting on Earth Day, April 22, in which he will outline the US goal for reductions of carbon emissions by 2030, known as the nationally determined contribution under the historic Paris accord.

The White House said a total of 40 world leaders, including Prime Minister Modi, Chinese President Xi Jinping and Russian President Vladimir Putin, were invited to the conference, which will be live-streamed to the public.

The primary vision of the policy-framework is to attain the highest possible level of health and well-being for all irrespective of all age groups. To attain this vision, the policy emphasizes preventive & promotive aspects of health and providing universal access to good quality healthcare services.

The award has been announced for 10 professionals across the world by the International Union for Conservation of Nature IUCN and World Commission on Protected Areas WCPA.

Developed through a collaboration between the IUCN WCPA, the International Ranger Federation, Global Wildlife Conservation, and Conservation Allies, these awards, created in 2020, aim to highlight and felicitate the extraordinary work that rangers do in protected and conserved areas worldwide.

Chakrabarty started his career as a banker with the Bank of Baroda where his last assignment was to head the UK operations of the bank between 2001 and 2004.

Chakrabarty, who had spent nearly four decades across multiple public sector banks, often spoke his mind on critical issues concerning the banking sector. He was also famous for his wit and sharp retorts.

14. 1971 Battle of Basantar hero, Lt Gen Pinto (retd) passes away
Lieutenant General, Walter Anthony Gustavo ‘WAG’ Pinto (Retd), a military hero who led an infantry division to a legendary victory in the 1971 India-Pakistan War has passed away at the age of 97.

He led the 54 Infantry Division in the Battle of Basantar in the war that gave birth to Bangladesh, leading his troops from the front with the motto he coined “bash on regardless”.

He was in his mid-70s, was the editor of several publications including Mid-Day and The Independent and played a vital role in opening the Akashwani Auditorium in south Mumbai as an art movie theatre.

Dharker had been the editor of a variety of publications, starting with ‘Debonair’, ‘Mid-Day’; ‘The Independent’ and ‘The Illustrated Weekly of India’.

He was a columnist for The Indian Express newspaper and has authored ‘The Romance Of Salt’, a book on Mahatma Gandhi’s Dandi March. He had also worked as a TV show producer and anchor.
He was also a member of the Advisory Boards of the Indian Council for Cultural Relations and the Children’s Film Society of India.

16. Suez Canal reopens after the giant stranded ship is freed
The giant container ship “Ever Given” that blocked traffic in the Suez Canal for the last week resumed its journey, after being successfully refloated. The efforts to float the delinquent Panamanian container ship Ever Given are successful.

The 1,400-foot-long cargo ship jammed diagonally across a southern section of the Suez Canal, leaving a total of 367 ships, including dozens of container ships and bulk carriers, unable to use the key trading route.