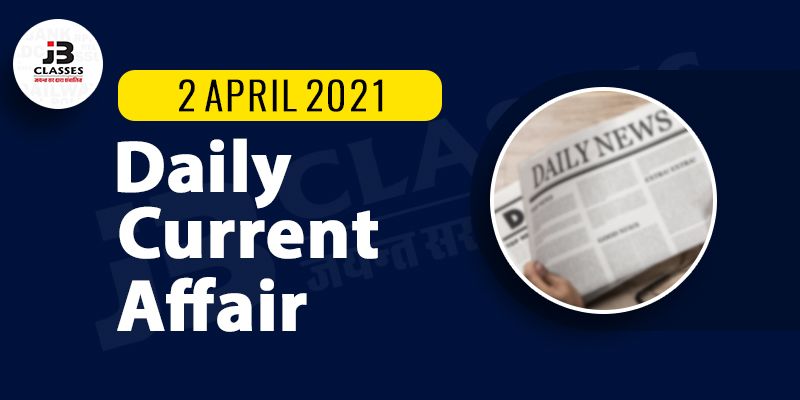 Here is the GK update of 02nd April 2021 to help you prepare the Current affairs part. After reading this section, you can successfully attempt Current Affairs Quiz.

However, the orders issued were withdrawn by the government on April 01, 2021. This marks the fourth consecutive quarter that the government has maintained the rates on such schemes that are effective from April 1 and remain in effect till June 30, 2021.

Earlier, he has worked as the Additional Secretary in the Department of Economic Affairs, Ministry of Finance. ESIC is a Statutory and an Autonomous Body under the Ministry of Labour and Employment.

The theme of the exercise is “Robust Peace Keeping Operations”. The exercise is being held to commemorate the birth centenary of Bangladesh ‘Father of the Nation’ Bangabandhu Sheikh Mujibur Rahman and mark glorious 50 years of liberation of the country.

The Indian Army is also participating in this multinational exercise, along with a contingent of the Royal Bhutan Army, Sri Lankan Army and Bangladesh Army.

The Indian contingent will comprise 30 personnel including Officers, JCOs and Jawans of a Battalion from The DOGRA Regiment.

The three Rafale fighter aircraft which took off from France for India were scheduled to land at the Jamnagar airbase. The planes equipped with the Hammer missiles have enhanced their capability to carry out air-to-ground strikes like the one in Balakot.

7. UNESCAP: India’s Economic Growth Of 7% in 2021-22
The United Nations Economic and Social Commission for Asia and the Pacific (UNESCAP) said in the latest update that, India’s is estimated to record economic growth of 7% in 2021-22, over a contraction of 7.7% witnessed in the previous fiscal on account of the pandemic’s impact on normal business activity.

It also noted that maintaining low borrowing costs while keeping non-performing loans in check would be a challenge.

Iceland has topped the index as the most gender-equal country in the world for the 12th time. Afghanistan is the worst-performing country in the report.

The Global Gender Gap Report 2021 is the 15th edition of the annual publication by WEF.

Facebook has partnered with leading regional and global partners to build two new subsea cables Echo and Bifrost that will provide vital new connections between the Asia-Pacific region and North America.

While Google is only investing in Echo. These cables will increase overall transpacific capacity by 70 per cent.

These projects are still subject to regulatory approvals, when completed, these cables are expected to deliver much-needed Internet capacity, redundancy, and reliability. The announcements come at a time when the Covid-19 pandemic has increased the need for reliable Internet access.

The company added that it plans to hire over 250 engineers and data scientists to build new wealth products and services.

Paytm Money aims to achieve over 10 million users and 75 million yearly transactions in FY21, with the majority of users coming from small cities and towns.

Rajinikanth is the 12th South Indian to get this award. Legends like Dr Rajkumar, Akkineni Nageshwar Rao, K Balachander have been awarded before. The legendary actor has been honoured with the Padma Bhushan and Padma Vibhushan in the past.

The 2021 World Autism Awareness Day observance will address these issues through a virtual event that will include moderated panel discussions with individuals on the autism spectrum who have themselves experienced the challenges and seen these new opportunities in the employment market.

The very first World Autism Day was observed in the year 2008 on April 2. It was adopted by the United Nations General Assembly on 18 December 2007. World Autism Day is one of only seven official health-specific UN Days.

Theme 2021: “The Music of Words.” Each year a different National Section of IBBY has the opportunity to be the international sponsor of ICBD and decide upon a theme. The IBBY United States is the sponsor for International Children’s Book Day 2021.