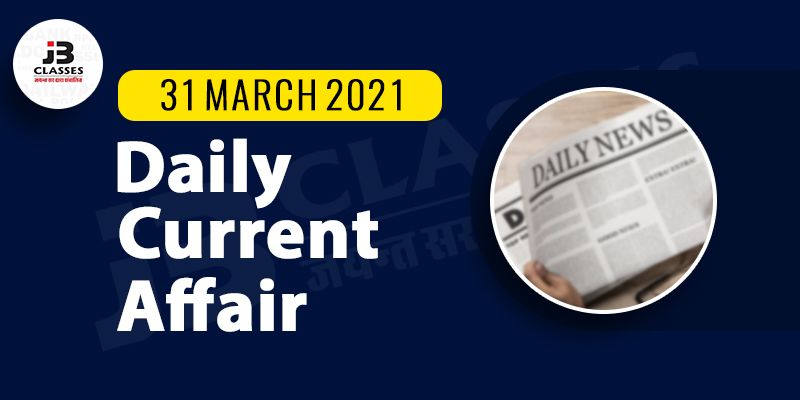 Here is the GK update of 31st March 2021 to help you prepare the Current affairs part. After reading this section, you can successfully attempt Current Affairs Quiz.

The park has been developed in joint consultation with the Ministry of Defence, the Government of India, the Indian Army, the Delhi Cantonment Board, the Embassy of Korea and the Korean War Veterans Association of India.

Besides being a symbol of strong India-South Korea friendly relations, this park will also act as a monument to India’s contributions as part of 21 countries that participated in the Korean war 1950-53, under the aegis of the United Nations.

The Convention Centre has been developed under the Swadesh Darshan Scheme of the Ministry of Tourism, adding another feather to the UNESCO World Heritage site at Khajuraho.

This new venue will cater to the business needs, by hosting meetings and conferences. The Convention Centre is equipped with all modern amenities and infrastructure to offer a secure space to host corporate banquets for teams both large and small amidst a soothing decor and ambience.

It is a unique card designed with association with one of the largest Public Sector Bank, Union Bank of India and HPCL, a leader in the fuel retail and Rupay – India’s largest card payment network. It will create an opportunity to create value for the customers.

The Bank is having a total network of 9590+ branches and 13280+ ATMs across India, this co-branded credit card is a Bank’s maiden joint venture.

While using this card at HPCL retail outlets, the cardholder gets Cashback/Rewards in addition to the waiver of fuel surcharge provided by the Bank.

Cardholders will be able to enjoy many freebies and offer brought out by NPCI such as Entertainment, Lifestyle, Travel, Shopping, Food delivery, etc.,

The card is offered to salaried and others. The card limit offered is 20% of gross annual income with a minimum of Rs 50,000/- with no upper limit.

4. India, US Carry Out Joint Military Drill In Himachal Pradesh
The 11th edition of Indo-US joint special forces exercises Vajra Prahar 2021 was conducted at Special Forces training school located at Bakloh, in Himachal Pradesh. The exercise ‘Vajra Prahar’ is aimed at sharing best practices and experiences in areas such as joint mission planning and operational tactics.

The exercise was aimed at improving interoperability between the special forces of the two countries. The armies of participating nations jointly train, plan and execute a series of operations for neutralisation of threats of varied nature with a common aim of countering threats of international terrorism through mutual training and jointness.

Indian PM Narendra Modiji was on a two-day official visit to Bangladesh to join the twin celebrations of Bangladeshi Founding Father Bangabandhu Sheikh Mujibur Rahman’s birth centenary and the golden jubilee of Bangladesh’s independence in 1971. This is the first trip of PM Modi to a foreign country since the outbreak of the coronavirus pandemic.

MoUs were signed in the following areas
Disaster management, resilience, and mitigation.

Establishment of a framework of cooperation in the area of trade remedial measures between Bangladesh and India.

6. 66th Filmfare Awards 2021: Check Complete List of Winners
The awards for the 66th annual Filmfare awards were announced. The event was hosted by actors Rajkummar Rao and Riteish Deshmukh. Despite the difficulties the film industry faced during 2020 as a result of the Covid-19 pandemic, Filmfare decided it was important to commemorate the best of Indian cinema.

Among the winners was the late Irrfan Khan, who won the award for best actor in a leading role (male) category, while Amitabh Bachchan bagged the best actor (critics) Award.

7. Maggie O’Farrell’s ‘Hamnet’ wins book critics award for fiction
Maggie O’Farrell’s Hamnet, an imagined take on the death of Shakespeare’s son from the bubonic plague, has won the National Book Critics Circle prize for fiction. Hamnet, an unfortunately well-timed story for the current pandemic, explores the impact of the boy’s illness and death on his family.

He was Shakespeare’s only son, and scholars have long speculated about his influence — if any — on “Hamlet,” which Shakespeare worked on in the years following Hamnet’s death.

Tom Zoellner’s Island on Fire: The Revolt That Ended Slavery in the British Empire won for nonfiction, and Amy Stanley’s Stranger in the Shogun’s City: A Japanese Woman and Her World was the winner in biography.

Dr Limbale’s Sanatan has been published in 2018. Sanatan is an important social and historical document of the Dalit struggle. Speaking first to All India Radio, Dr Limbale was overjoyed with emotion as he started his career with the public broadcaster.

9. India tops the medals tally with 15 gold at Delhi ISSF Shooting World Cup
India finished at the top of the medals table at the 2021 ISSF World Cup New Delhi, held from 18 to 29 March 2021 at the Dr Karni Singh Shooting Range in New Delhi. India secured 30 medals which included 15 gold, 9 silver and 6 bronze.

The USA came second with eight medals including four gold, three silver and one bronze.

The day was founded by US-based transgender activist Rachel Crandall of Michigan in 2009.
As a reaction to the lack of LGBT recognition of transgender people, citing the frustration that the only well-known transgender-centred day was the Transgender Day of Remembrance which mourned the murders of transgender people but did not acknowledge and celebrate living members of the transgender community.

Jeet Thayil is a renowned author, best known for his book ‘Narcopolis’ which was shortlisted for the Man Booker Prize 2012 and won the DSC Prize for South Asian Literature. His most recent book ‘Low’ was released in 2020.

The author whose memories of her Oregon childhood were shared with millions through the likes of Ramona and Beezus Quimby and Henry Huggins.

The centre will help people overcome mental stress and help spread positivity and it will encourage and propagate holistic development for all the stakeholders at IIM Jammu.