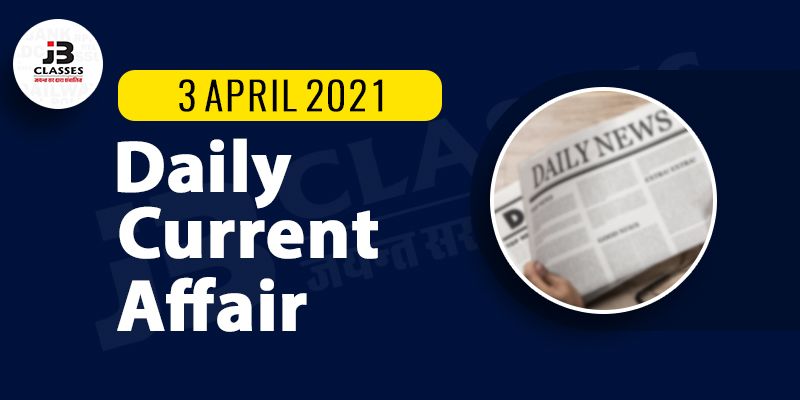 Here is the GK update of 03rd April 2021 to help you prepare the Current affairs part. After reading this section, you can successfully attempt Current Affairs Quiz.

The platform seeks to invite suggestions/inputs/membership from the stakeholders for preparing a draft for the development of National Professional Standards for Teachers (NPST) and National Mission for Mentoring Program membership (NMM).

This exercise of digital consultation envisages the participation of teachers, education professionals, academicians, and other stakeholders in preparing the documents on teacher policy for sustainable and positive change in the Teacher’s Education Sector.

For preparing the documents on the above two major recommendations of NEP 2020, NCTE will work in close consultation with individuals/organizations. The expert committee will extensively review the inputs collected during the consultation period and will finally formulate the drafts for public review.

The government has announced that from this year 14th April will be declared as a public holiday.  It will be Ambedkar’s 130th birth anniversary on April 14, 2021.

Chief Minister Uddhav Thackeray”s son Tejas Thackeray, who is a wildlife researcher, and his team had discovered the new freshwater fish species – Schistura Hiranyakeshi” near Amboli in Sawantwadi tehsil of Sindhudurg district.

The State government issued a notification declaring the area at Amboli as a biodiversity heritage site. Schistura is a small and colourful fish that lives in water and streams in an abundance of oxygen.

This is for the first time that a private sector specialist has been appointed as the head of the PESB, responsible for the appointment of top management posts in the Central Public Sector Enterprises (CPSEs).

The Appointments Committee of the Cabinet has approved the appointment of Srinivasan as the chairperson of PESB for a period of three years from the date of assumption of charge, or until the attainment of the age of 65 years.

The government has approved a commission under National Programme for Civil Services Capacity Building (NPCSCB), also known as ‘Mission Karmayogi’, to train civil servants at all levels.

The approved Capacity Building Commission will coordinate with and supervise all the government offices, training institutes to monitor and evaluate the implementation of plans and create shared resources. The Commission will comprise of a Chairperson and two Members.

8. ICICI Bank, PhonePe Tie Up For Issuance Of FASTags
ICICI Bank and PhonePe announced their partnership for the issuance of FASTag using UPI on the PhonePe App. This integration allows over 280 million registered PhonePe users to order and track the ICICI Bank FASTag conveniently on the app.

PhonePe users, who may be customers of any bank, will have a fully digitised experience as they don’t have to visit physical stores or toll locations to buy a FASTag.

ICICI Bank is the first bank to partner with PhonePe for the issuance of FASTag. NPCI, IHMCL and NHAI are working together to make toll payments fully digital.

9. GST revenue collection in March 2021
India’s economic recovery is gathering steam. The GST collections for the month of March have topped Rs 1.23 lakh crore, setting a new record since the implementation of Goods and Services Tax in July 2017.

He is the first Wushu player from southern India to reach the Indian team. Midhun is a black belt in karate and he is also a national champion in wushu as well as kickboxing.

In fact, the 28-year-old was introduced to wushu when he was in the fifth standard and hasn’t looked back since. He is currently training with veteran coach Kuldeep Handu who is an Arjuna Award winner and the Indian wushu head coach.

The translator of the book is Shri Annavarapu Brahmaiah and the publisher is Shri Maruthi.
Miscellaneous News

According to Railway Minister Piyush Goyal, trains passing through this railway section can now be operated at a faster speed. Electrification of this railway section will provide various benefits such as saving fuel, reduction in travel time, as well as environmental protection.