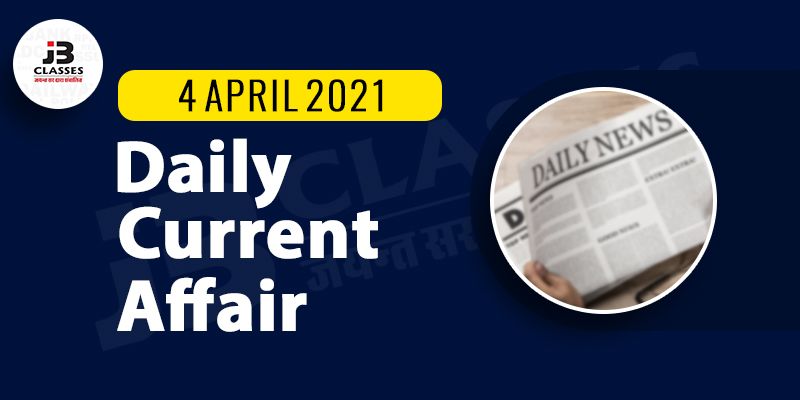 Here is the GK update of 04th April 2021 to help you prepare the Current affairs part. After reading this section, you can successfully attempt Current Affairs Quiz.

1. Russia registers world’s 1st Covid vaccine Carnivac-Cov for animals
The world’s first animal vaccine against the novel coronavirus has been registered in Russia, the country’s agriculture safety watchdog Rosselkhoznadzor. The vaccine for animals, developed by a unit of Rosselkhoznadzor (Federal Service for Veterinary and Phytosanitary Surveillance), was named Carnivac-Cov.

This plan was announced by Chief Minister Ashok Gehlot in the state budget of 2021-22.  The State began the registration for its cashless ‘mediclaim’ scheme Chiranjeevi Health Insurance Scheme.
Each family will get annual health insurance up to 5 lakhs.

Registrations have started for the Chiranjeevi Health Insurance Scheme from 1 April, while the scheme will start benefiting the residents after its implementation on May 1.

In this health insurance cover, 1576 packages and procedures for the treatment of various diseases have been included.

The cost of treatment related to OPD, examination, medicines and related package of 15 days after discharge will also be included in the free treatment before the patient is admitted to the hospital.

The solar power plant is being set up at the Ramagundam Thermal Power Plant reservoir.

The solar power plant is to be set up in 450 acres of the reservoir.

The project is commissioned by NTPC (National Thermal Power Corporation).

NTPC aims to reduce its carbon footprints and increase its green energy production to 30% of its capacity through this solar power plant.

The capacity of the solar power plant is 100 MW.

The company achieved the feat in March 2021, when the total transactions clocked around 1.3 billion on its platform, across the payment instruments offering of wallet, cards as well as UPI.

PhonePe, which first achieved market leadership on UPI in December, last year, has seen its transaction count grow steadily, on the back of rising merchant payments. Overall UPI transactions processed by PhonePe grew from 902.03 million in December 2020 to 975.53 million in February 2021.

All licensed bill processors on the Bharat Bill Payment Operating Units (BBPOU), i.e. the banks and payment aggregators, have been directed to start accounting their billing transactions under NBBL from April 1 2021.

The decision to set up a separate subsidiary for bill payment business aims to scale growth of the interoperable bill platform by giving it increased autonomy in operations and onboarding of new billers. BBPS is an interoperable bill payments platform set up in 2013, for use by banks, fintech companies and biller merchants to automate bill collection and request solutions.

With this association, the company aims to carry the message of ‘making insurance simple’ through the cricketer. Digit was able to get the Indian Men’s Cricket Team Captain to invest in the company before he planned to become the face for the brand.

The Policy also focuses on early screening and prevention through primary and secondary health care infrastructure such as Health and Wellness Centres and District Early Intervention Centres.

A provision for financial support up to Rs.20 lakh under the Umbrella Scheme of Rashtriya Arogya Nidhi is proposed for treatment of those rare diseases that require a one-time treatment (diseases listed under Group 1 in the policy). Benefits to be extended to about 40% of the population eligible under PM Jan Arogya Yojana.

Vice-President M Venkaiah Naidu conferred Biswabhusan with the prestigious award in Cuttack on the occasion of the 40th annual day of the Sarala Sahitya Sansad at the Sarala Bhawan.
The Kalinga Ratna Samman carries a silver idol of Goddess Saraswati, a copper plaque and a shawl.

This year, the United Nations will promote mine action by highlighting how “Perseverance, Partnership, and Progress” have carried the sector through this challenging year.