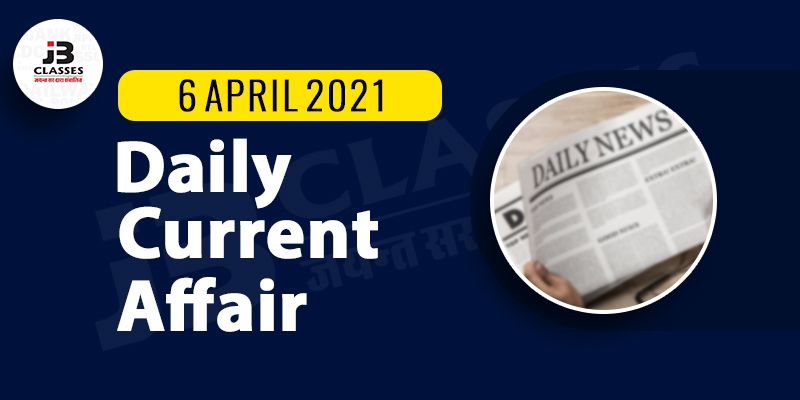 Here is the GK update of 06th April 2021 to help you prepare the Current affairs part. After reading this section, you can successfully attempt Current Affairs Quiz.

The project titled “Mizoram Health Systems Strengthening Project” will strengthen the governance and the management structure of the Mizoram Health department and its subsidiaries.

This project will support the state government’s efforts to deliver quality healthcare for the poor and vulnerable and those located in remote areas.

3. RBI deputy governor BP Kanungo retires
BP Kanungo has stepped down from the post of the deputy governor of the Reserve Bank of India after his term ended on 2 April, cutting short all expectations of an extension of his tenure.

He was appointed deputy governor in 2017 for three years. His term was extended by one more year in 2020. The other deputy governors of the RBI are Rajeshwar Rao, M.K. Jain and Michael Patra.

The 70-year-old, a 1973 batch IPS officer, takes over from Ajit Singh whose tenure ended on March 31.

After retiring as Gujarat DGP in late 2010, Khandwawala worked with the Essar Group as an advisor and was also part of the central government’s Lokpal Search Committee.

The main aim of this drive is to activate the Van Dhan Vikas Kendras. Ministry of Tribal Affairs in a statement said that 100 villages in each region and 1500 villages in the country will be covered in the next 100 days.

They will also identify tribal artisans and other groups and empanel them as suppliers so that they can have access to larger markets through the Tribes India network – both physical outlets and TribesIndia.com.

It is expected that Sankalp Se Siddhi will aid in effecting a complete transformation of the tribal ecosystem across the country.

The Turing Award carries a $1 million prize, with financial support provided by Google, Inc. It is named for Alan M. Turing, the British mathematician who articulated the mathematical foundation and limits of computing.

Instituted in 1991, the award recognises eminent Indian scientists below the age of 50 for their original and outstanding contributions to any branch of science or technology. It carries a cash prize of ₹5 lakh.

The recipient is chosen by a selection board, whose present head is professor Chandrima Shaha, the president of the Indian National Science Academy (INSA).

The city of Tashkent is awarded the 2023 AIBA Men’s World Boxing Championships after the successful bid presentation by the Boxing Federation of Uzbekistan. The AIBA Board of Directors voted in favour of the major event candidate city.

9. Hurkacz beats Sinner to win Miami Open
Hubert Hurkacz of Poland won the biggest title of his career by beating 19-year-old Jannik Sinner of Italy 7-6 (4), 6-4 in the Miami Open final. Hurkacz became his country’s first Masters 1000 champion.
The world number 37 is the lowest-ranked player to win a Masters event since Tomas Berdych in Paris in 2005.

Sport can help promote fairness, team building, equality, inclusion and perseverance. Sport and physical activity can also help us get through times of crisis, like COVID-19, by reducing anxieties and improving physical and mental health.

The professional sport also provides employment and income to many people around the world and an integral sector to the economic success of many communities and regions.

The National Maritime Day was first celebrated on April 5, 1964. The saga of India shipping first started on April 5, 1919, when the SS Loyalty, the first ship of The Scindia Steam Navigation Company Ltd travelled from Mumbai to the United Kingdom (London). On this day an award called “Varuna” is conferred to those who made an outstanding contribution to the Indian maritime sector.