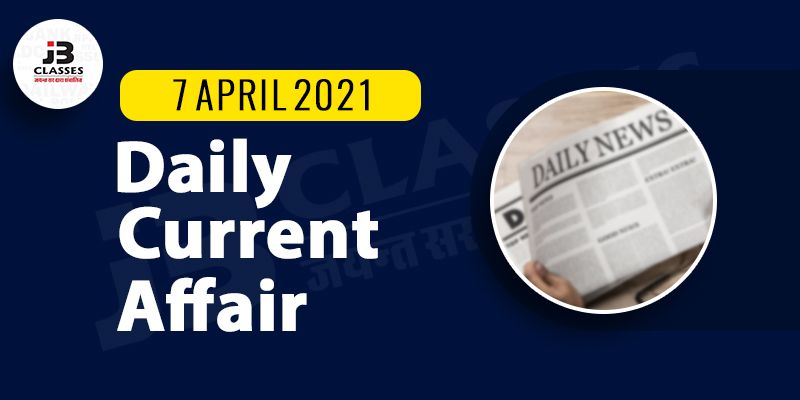 Here is the GK update of 07th April 2021 to help you prepare the Current affairs part. After reading this section, you can successfully attempt Current Affairs Quiz.

The 1.3-kilometre-long bridge aims to boost connectivity to the Kashmir Valley and it is being constructed at a cost of ₹ 1,486 crores as part of the Udhampur-Srinagar-Baramulla Railway Link (USBRL) project.

Features of the Arch of the iconic Chenab Bridge:
The construction of the Chenab bridge was declared as a national project in 2002.

Indian Railways is constructing the iconic Arch Bridge on River Chenab as a part of the USBRL project to connect the Kashmir valley to the rest of the nation.

This is the highest Railway Bridge in the world being 359m above the river bed level.

The most sophisticated ‘Tekla’ software used for structural detailing.

Structural steel was suitable for -10°C to 40°C temperature.
Bridge designed to withstand high wind speed up to 266 Km/Hour.

Bildt succeeds Ngozi Okonjo-Iweala and Andrew Witty in the special envoy role. He will help lead the collective advocacy for the ACT-Accelerator in his new role, mobilising support and resources so it can deliver against its strategy for 2021.

The ACT-Accelerator is a groundbreaking global collaboration to accelerate development, production, and equitable access to novel coronavirus disease (COVID-19) tests, treatments and vaccines, according to the WHO website.

These include the Bill & Melinda Gates Foundation, CEPI, FIND, Gavi, The Global Fund, Unitaid, Wellcome, the WHO and the World Bank.

3. Justice N V Ramana to assume charge as next CJI
The senior-most Supreme Court judge Justice Nuthalapati Venkata Ramana has been appointed as the next Chief Justice of India (CJI).

Justice Ramana would succeed incumbent CJI Sharad Arvind Bobde to take over as the 48th CJI. He would assume charge of the office from April 24, 2021, till August 26, 2022.

Prior to this, Bajaj, a 1988 batch Haryana-cadre IAS officer, was serving as the Economic Affairs Secretary since April 30, 2020.

The cabinet has also approved the appointment of Ajay Seth, a 1987 batch Karnataka-cadre IAS officer, as new Economic Affairs Secretary in place of Bajaj.

Vaishnav will take over from Ramanathan Ramanan later this month. Ramanan has been leading AIM as its first mission director since June 2017.

Vaishnav is currently at the Massachusetts Institute of Technology (MIT), US. He holds a PhD in technology, management, and policy from MIT.

The development of Advanced Chaff Technology by the DRDO lab is another step towards Atmanirbhar Bharat.

The importance of this development lies in the fact that a very less quantity of chaff material deployed in the air acts as a decoy to deflect the enemy’s missiles for the safety of the ships.

The revised forecast was published in the IMF’s World Economic Outlook. India is the only country among major world economies that is projected to grow at a double-digit rate during FY22.

The Reserve Bank of India is likely to keep policy rates unchanged amid the uncertainty created by a fresh surge in coronavirus infections.

The 35th edition Forbes World’s Billionaires list was released on April 06, 2021, comprising a record-breaking 2,755 billionaires. The list is prepared based on the wealth using stock prices and exchange rates from March 5, 2021.

From exciting activities to pledges and support plans, these events aim to create awareness about what can increase the life expectancy of people around the world. The Theme of World Health Day 2021: “Building a fairer, healthier world for everyone”.

The International Day of Reflection on the 1994 Genocide against the Tutsi in Rwanda was announced by the United General Assembly in 2003.

On April 7th, the date where the genocide against members of the Tutsi began. For approximately 100 days, over 800,000 Tutsi were assassinated.

The veteran Congress leader became the first Environment Minister of India under the then Prime Minister Indira Gandhi from 1982 to 1984.

Khemka for 38 years was the editor of the prominent ‘Kalyan’ magazine printed at the press. He last edited the magazine’s April 2021 issue. Gita Press is the world’s largest publisher of Hindu religious texts.