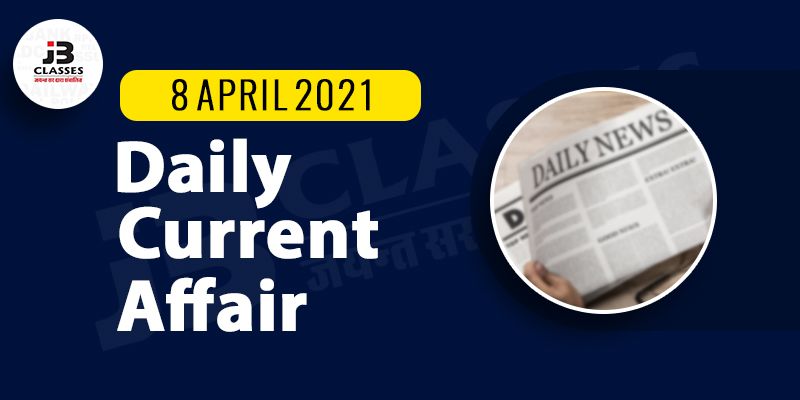 Here is the GK update of 08th April 2021 to help you prepare the Current affairs part. After reading this section, you can successfully attempt Current Affairs Quiz.

Anamaya is a multi-stakeholder initiative to enhance the health and nutrition status of the tribal communities of India by converging efforts of various Government agencies and organisations.

As part of this Collaborative, the Ministry will undertake several activities such as setting up the National Council on Tribal Health to drive policy initiatives in tribal health, the establishment of a Health Cell to closely monitor healthcare delivery in the tribal areas and devising mechanisms to implement the Tribal Health Action Plan.

2. CJI launches top court’s AI-driven research portal ‘SUPACE’
The Supreme Court of India has launched it’s Artificial Intelligence portal “SUPACE” (Supreme Court Portal for Assistance in Courts Efficiency). Through this portal, the SC intends to leverage machine learning to deal with the vast amounts of data received at the time of filing of cases.

Justice L Nageshwara Rao, who is also the chairman of the SC’s Artificial Intelligence Committee, delivered the opening address during the virtual launch of SUPACE.

Chief Justice of India (CJI) SA Bobde was the first-ever chairman of the Artificial Intelligence Committee.

CJI Bobde first spoke of the use of AI to assist the Supreme Court soon after he took oath as the Chief Justice in 2019.

The votes of the nearly 500 members of the National Assembly rubber-stamped the leadership picks the Communist party made during its national congress in January.

While 82 deputies participated in the vote in the 120-member parliament, 11 votes were declared invalid. The 38-year-old politician studied law at the University of Pristina in Kosovo and earned a doctorate from Pittsburgh University in the US.

The appointment is for a period of three years from the date of his assuming the charge or until further orders. Banks Board Bureau, the headhunter for state-owned banks and financial institutions, had recommended his name for the post.

The FI Index would be based on multiple parameters and shall reflect the broadening and deepening of financial inclusion in the country, a statement on regulatory and developmental policies of RBI.

RBI has extended the enhanced interim WMA limit of ₹ 51,560 crores (a 60 per cent increase in the current limits allowed by the Reserve Bank during the last fiscal to help states/UTs to tide over the difficulties faced by them during the pandemic) for a further period of six months i.e., from April 1, 2021, up to September 30, 2021.

The step has been taken to encourage the efforts of Payments Bank for financial inclusion and to expand their ability to cater to the needs of their customers, including MSMEs, small traders and merchants.

The extant “Guidelines for Licensing of Payments Banks” issued on November 27, 2014, allow payments banks to hold a maximum balance of ₹ 1 lakh per individual customer.

Based on a review of the performance of payments banks and with a view to encouraging their efforts for financial inclusion and to expand their ability to cater to the needs of their customers, including MSMEs, small traders and merchants.

9. RBI enhances Loan limit under Priority Sector Lending against eNWR/NWR
The Reserve Bank of India has enhanced the loan limit from Rs 50 lakh to Rs 75 lakh per borrower against the pledge/hypothecation of agricultural produce backed by Negotiable Warehouse Receipts (NWRs)/electronic-NWRs(e-NWRs) issued by the warehouses registered and regulated by Warehousing Development and Regulatory Authority (WDRA).

The Priority Sector loan limit backed by other Warehouse Receipts will continue to be ₹50 lakh per borrower. The circular in this regard will be issued separately.

With a view to encourage farm credit to individual farmers against pledge/hypothecation of agricultural produce and leverage the inherent safety of NWRs/(e-NWRs) issued by warehouses registered and regulated by WDRA.

Following this agreement, Bharti Airtel will receive a consideration of ₹1,037.6 crores from Reliance Jio for the proposed transfer. In addition, Reliance Jio will assume future liabilities of ₹459 crores relating to the spectrum.

As per the agreement, which is subject to statutory approvals, Reliance Jio will acquire the right to use spectrum in the 800MHz band in Andhra Pradesh (3.75 MHz), Delhi (1.25 MHz) and Mumbai (2.50 MHz) circles through spectrum trading.

The event marking the release of the Hindi version has been organised by the Harekrushna Mahtab Foundation.

12. FIFA suspends Pakistan and Chad football federations
FIFA has suspended the Pakistan Football Federation (PFF) and Chadian Football Association (FTFA) with immediate effect due to claims of outside interference. The suspension will be lifted once the relevant government decisions have been repealed.

A group of football officials led by Ashfaq Hussain, which was elected by the Supreme Court in 2018 to run the PFF but was not recognised by FIFA, took over the headquarters recently and seized control from the FIFA Normalisation Committee headed by Haroon Malik.

The Chadian Ministry of Youth and Sports had stripped the country’s FA of its powers on March 10 following concerns over the way it was being run and a breakdown in communication.

She had done her first commentary during a match between national champions Bombay (now Mumbai) and MCC in Indore in 1977. She had also penned a book titled ‘CK Nayudu: A Daughter Remembers’ on her late father, who was a distinguished cricketer.

Ms Zakaria, who had played an eminent role in the field of education, was also honoured with the Sarojini Naidu Integration Award for Journalism in 1983.