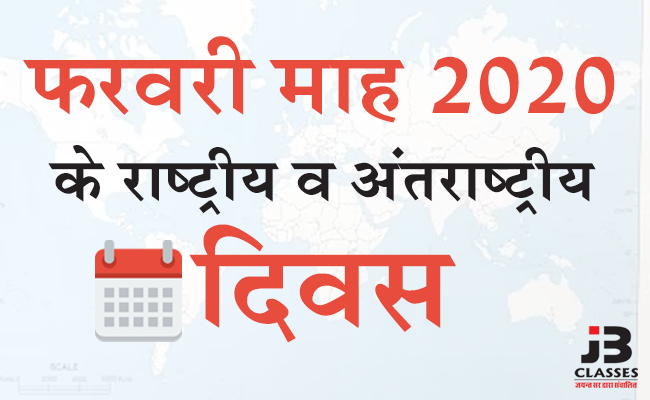 List of Important Days and Dates For February 2020: National and International

Here, we are providing you the list of important days and dates for February 2020. In this list, we have updated the important national and international day.

Indian Coast Guard celebrates its foundation day on 1st February. The Indian Coast guard was established on 1 February 1977 to prevent the sea-borne smuggling of goods. On 18 August, 1978 the Parliament passed the coast Guard Act which came into immediate effect. Indian Coast Guard is the force which protects maritime interests and enforces maritime law, with the jurisdiction over the territorial waters of India. It works in cooperation with the Department of Fisheries, Indian Navy, the Department of Revenue and police forces.

Every year on 4 February World Cancer Day is observed globally and is celebrated by WHO to aware people of the disease Cancer and how to cure it. The Theme for 2020 is ‘I Am and I Will’. According to World Heath Organization, the theme is an empowering call-to-action urging for personal commitment and represents the power of individual action taken now to impact the future
12 February – Darwin Day

12 February is celebrated every year as Darwin Day to commemorate the birth anniversary of the father of evolutionary biology, Charles Darwin . This day highlights Darwin’s contribution to evolutionary and plant science. The famous ‘Origin of Species’ was voted the most influential academic book in history.

World Day of Social Justice is observed on 20 February to encourage people to see how social justice affects poverty eradication. The aim of this day is to achieve full employment and support for social integration. This day tackle issues like poverty, exclusion, and unemployment.

International Mother Language Day is celebrated annually on 21 February worldwide to aware of the diversity of the language and its variety. This day promotes the awareness of language and cultural diversity across the world. On 17 November, 1999, it was first announced by UNESCO.

Central Excise Day is observed to encourage the employees of the excise department to carry out the central excise duty in a better way to prevent corruption in the manufacturing business.

National Science Day is celebrated to mark discovery of the Raman Effect by the Indian physicist Chandrasekhara Venkata Raman. He discovered the Raman Effect on 28 February, 1928 and was honoured by the Nobel Prize in Physics subject in 1930.