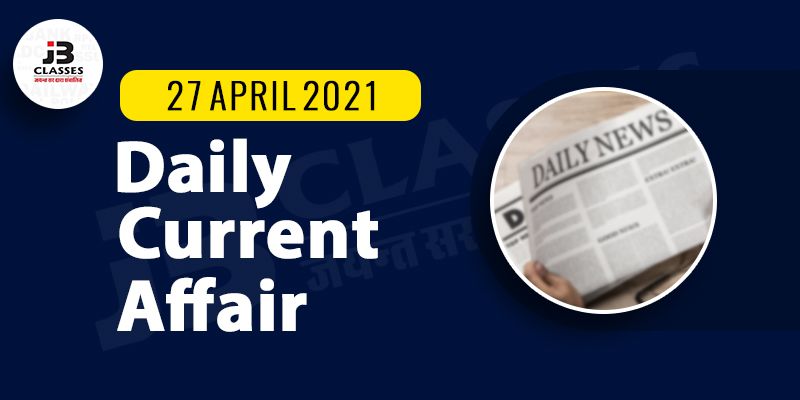 Here is the GK update of 27th April 2021 to help you prepare the Current affairs part. After reading this section, you can successfully attempt Current Affairs Quiz.

2. Goldman Sachs Downgrade India’s GDP Growth Forecast to 10.5% for FY22
Wall Street brokerage, Goldman Sachs revised downward the GDP growth forecast of India for the fiscal year 2021-22 (FY22) to 10.5 per cent from the earlier estimate of 10.9 per cent.

The downward revision is due to the increasing number of pandemic cases and a host of key states announcing stricter lockdowns, thus affecting economic activities.

3. RBI Caps Tenure of Private Banks MD & CEO at 15 Years
The Reserve Bank of India (RBI) has capped the tenure of Managing Director and Chief Executive of commercial banks to 15 years. The same limit will also be applicable to whole-time directors (WTD). This means that the same incumbent cannot hold the post for more than 15 years.

The revised instructions will be applicable to all the Private Sector Banks including Small Finance Banks (SFBs) and wholly owned subsidiaries of Foreign Banks. However, it will not be applicable to foreign banks operating as branches in India.

4. India Joins Rescue Ops For Missing Indonesian Submarine “KRI Nanggala-402
The Indian Navy has joined the rescue operation for an Indonesian submarine and its 53-person crew that went missing more than 4 days ago. Indonesia had sought assistance from India after its 44-year-old submarine, KRI Nanggala-402, went missing while conducting a torpedo drill north of the island of Bali.

The award is presented annually by the Academy of Motion Picture Arts and Sciences (AMPAS). 2021 Oscars honoured the best films of 2020 and early 2021.

American drama ‘Nomadland’ won most honours with three awards. Chloe Zhao, who directed “Nomadland”, was crowned best director, and with this, she became the only second woman to claim the title and the first woman of colour to win that award.

Indian film personalities Irrfan Khan and Bhanu Athaiya were honoured in the “In Memoriam” montage showcased at the event.

This is the second tournament where Nadal has captured 12 or more titles. The 13-time Roland Garros champion will return to No. 2 in the FedEx ATP Rankings.

City’s victory equalled Liverpool’s achievement in the early 1980s of winning the competition four years in a row.

8. A new book title “Living Mountain” by Amitav Ghosh
“The Living Mountain” is a new story by Jnanpith winner and internationally renowned author Amitav Ghosh, written during the course of the pandemic. It is a fable for the current times: a cautionary tale of how humans have systematically exploited nature, leading to an environmental collapse.

HarperCollins Publishers India will publish The Living Mountain as a special standalone edition in January 2022 under its prestigious Fourth Estate imprint. The book will also be published simultaneously in Hindi, and as an ebook and an audiobook.

He was deeply associated with Defence Research and Development Organization(DRDO), Department of Atomic Energy (DAE) and Institute for Defence Studies and Analyses (IDSA).

He was a vocalist in the khyal style of Indian classical singing. Mishra was awarded Padma Bhushan in the field of art in 2007.

Pandit Rajan Mishra was also a recipient of the Sangeet Natak Akademi Award, the Gandharwa National Award and the National Tansen Samman.

Khattar joined Maruti in July 1993 as Director, and was eventually elevated as Managing Director in 1999, first as government nominee, and then in May 2002, as Suzuki Motor Corporation nominee.

After his retirement from Maruti in October 2007, Khattar launched an entrepreneurial venture named Carnation Auto.

In a powerful video released ahead of World Immunization Week, Beckham talks about the loss of everyday activities due to COVID-19, such as hugs with family, spending time with friends, and being with the people we love, and encourages parents to vaccinate themselves so that they can be safe.