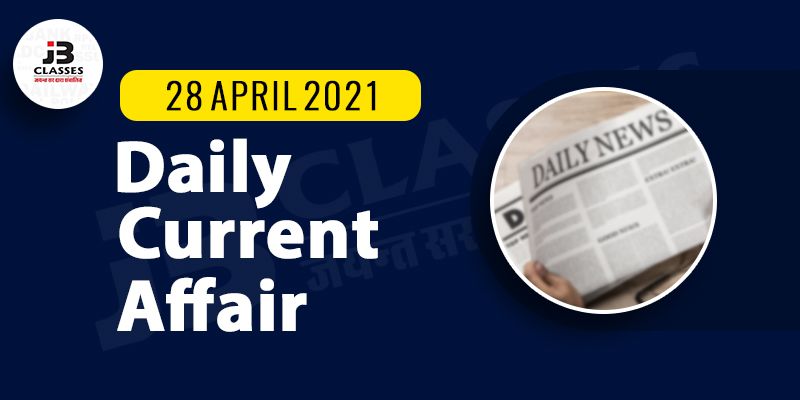 Here is the GK update of 28th April 2021 to help you prepare the Current affairs part. After reading this section, you can successfully attempt Current Affairs Quiz.

It must be remembered that the Shivalik Mercantile Co-operative Bank (SMCB) is the first urban co-operative bank (UCB) in India to receive licence from RBI to operate as a Small Finance Bank (SFB).
The bank has received the licence from RBI under Section 22 (1) of the Banking Regulation Act, 1949 to carry on the business of small finance bank in India.

Shivalik SFB area of operation is Uttar Pradesh, Delhi, and parts of Madhya Pradesh and Uttarakhand.

Earlier it predicted this at 11.8 per cent. The downward revision is based on the country’s serious health burden, weak vaccination rate and lack of a convincing government strategy to contain the pandemic.

The PESB announced on meeting held on April 26, 2021. Currently, he is serving as Director (Rail & Metro), BEML Limited.

In his professional career spanning over three decades in BEML, Shri Banerjee has worked in R&D and manufacturing functions. His experience involves the design & development of various products like SSEMU, Metro cars, Catenary Maintenance Vehicle, etc.

4. Arun Raste named new MD & CEO of NCDEX
Market regulator Securities and Exchange Board of India (SEBI) has given approval to the appointment of Arun Raste as MD and CEO of National Commodity & Derivatives Exchange Limited (NCDEX) for a period of 5 years.

Raste is currently associated with the National Dairy Development Board (NDDB) as an Executive Director and prior to NDDB, he has worked with organisations like IDFC First Bank, Kotak Mahindra Bank, NABARD, ACC Cement, and a non-profit NGO IRFT.

This is part of a programme taken up by the Defence Metallurgical Research Laboratory (DMRL) to develop five sets of single-crystal high-pressure turbine (HPT) blades using a nickel-based superalloy.

These five nations together accounted for 62 per cent of global military expenditure.
Globally, the military spending in 2020 rose to $1981 billion. This value is an increase of 2.6 per cent in real terms as compared to 2019.

7. Uttar Pradesh won e-panchayat award
The Uttar Pradesh government won the “E-Panchayat Puraskar 2021”, ranking first in Category I. It was followed by Assam and Chhattisgarh at the second position, while Odisha and Tamil Nadu stood third.

Every year, the Union Ministry of Panchayati Raj awards those states, which ensure maximum use of information technology to keep a tab on the work done by gram panchayats.

The novel has been translated into English by the author herself. The book is about an unnamed female protagonist over 45 years as she looks at her life, glancing, sideways, back and forth, chronicling life, relationships and burden of relationships, in short, succinct chapters.

The theme for 2021 is “Anticipate, prepare and respond to crises – Invest Now in Resilient Occupational Safety and Health Systems”.

The World Day for Safety and Health at Work is an annual international campaign to promote safe, healthy and decent work. It is persisted 28 April and has been observed by the International Labour Organization (ILO) since 2003.

Theme 2021: ‘Health and Safety is a fundamental workers‘ right.’

Its purpose is to remember workers killed in incidents at work or by diseases caused by work and honour the victims of occupational accidents and diseases by organizing worldwide mobilizations and awareness campaigns on this date.

He was awarded the Padma Shri in 2021 for his contribution in literature and education. Besides, he had written songs for 15 Gujarati films.