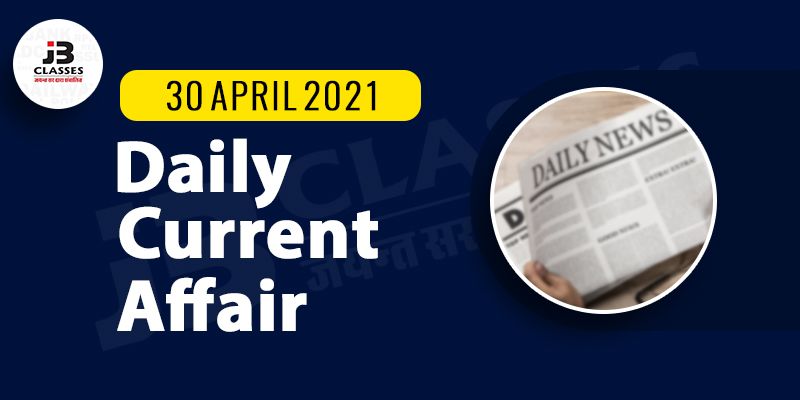 Here is the GK update of 30th April 2021 to help you prepare the Current affairs part. After reading this section, you can successfully attempt Current Affairs Quiz.

1. RBI joins network for greening financial system
The Reserve Bank of India (RBI) has joined the Central Banks and Supervisors Network for Greening the Financial System (NGFS) as a member.

The central bank joined the NGFS on April 23, 2021. Green finance assumed significance in the context of climate change.

The RBI expects to benefit from the membership of NGFS by learning from and contributing to global efforts on green finance, which has assumed significance in the context of climate change.

Launched at the Paris One Planet Summit on December 12, 2017, the NGFS is a group of central banks and supervisors willing to share best practices and contribute to the development of environment and climate risk management in the financial sector, while mobilising mainstream finance to support the transition towards a sustainable economy.

Retail merchants can avail the ‘Merchant Stack’ services on InstaBIZ, the mobile banking application of ICICI Bank for businesses.

The wide range of banking, as well as value-added services, will enable merchants to meet their banking requirements seamlessly so that they can continue to serve their customers in the challenging times during the pandemic.

4. TV Somanathan named finance secretary by ACC
The Appointments Committee of the Cabinet (ACC) has approved the appointment of T V Somanathan as the new Finance Secretary. He will replace Ajay Bhushan Pandey who superannuated in February 2021.

Somanathan, a 1987 batch IAS officer of Tamil Nadu cadre, was currently serving as the Secretary, Department of Expenditure, Ministry of Finance. Earlier, he has served as a joint secretary in the Prime Minister’s Office.

Somanathan was awarded the Gold Medal for the Best IAS trainee of his cohort. He holds a PhD in Economics from Calcutta University and is a chartered accountant, chartered management accountant and chartered secretary.

5. Niraj Bajaj named Bajaj Auto Chairman
Bajaj Auto has announced the appointment of Neeraj Bajaj as its new Chairman of the Board with effect from May 1, 2021. The automaker has also announced Rahul Bajaj as its Chairman Emeritus.
This will be taken up at the ensuing annual general meeting for the approval of the shareholders.

DEFENDER-Europe is an annual large-scale U.S. Army-led, multinational exercise, defensive in nature and focused on deterring aggression, which this year focuses on building operational readiness and interoperability with NATO and a greater number of allies and partners over a wider area of operations than ever before.

Around 28,000 U.S., allied and partner forces from 26 nations will conduct nearly simultaneous operations across more than 30 training areas in more than a dozen nations from the Baltics and Africa to the critical Black Sea and Balkan regions.

The day was created on the idea of jazz pianist and UNESCO Goodwill Ambassador Herbie Hancock.

The United Nations Educational, Scientific and Cultural Organization (UNESCO) proclaimed 30 April as International Jazz Day in November 2011. The day was designated to bring together communities, schools, artists, historians, academics, and jazz enthusiasts from across the world to celebrate and learn about the art of jazz and its impact.

9. American Astronaut-Pilot Michael Collins Passes Away
The American astronaut, Michael Collins, who was the command module pilot for the Apollo 11 mission to the moon, has passed away, after losing his battle to cancer.

During the three-man Apollo 11 crew mission in 1969, Collins kept the command module flying while the other two members, Neil Armstrong and Buzz Aldrin became the first humans to walk on the moon.

Collins spent seven years of his career as an astronaut with NASA.

The single-storey home has been built in just five days over an area of about 600 sq. ft using ‘Concrete 3D Printing” technology.

The house is by IIT-Madras based start-up ‘TVASTA Manufacturing Solutions’, within the campus, in association with Habitat for Humanity’s Terwilliger Centre for Innovation in Shelter.

The 3D Printed House would help to meet the deadline of Prime Minister Narendra Modi’s vision of the ‘housing for all’ scheme by 2022.